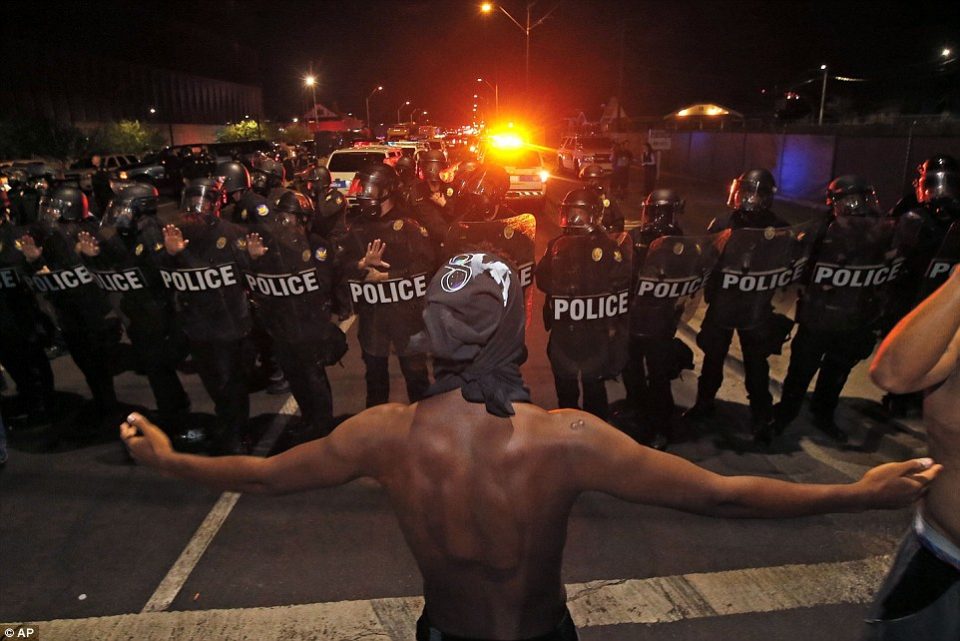 A protester stands in front of a line of cops. Image: Twitter/@SteveRustad1

Senate Democrats have blocked Republicans from taking up a bill on police reform, calling the legislation flawed and a non-starter.

According to NBC News, a motion to open debate on the measure failed 55-45. The motion needed 60 votes to go forward. Ahead of the vote, Senate Minority Leader Chuck Schumer (D-NY) attacked Majority Leader Mitch McConnell (R-Ky.) and Republicans for a “partisan and “irrevocably flawed” approach to solving police brutality.

The GOP bill would require additional disclosures about the use of force, codify reporting requirements on the use of “no-knock warrants,” and provide incentives for chokehold bans. It would also make lynching a federal crime.

The Democratic proposal would ban chokeholds and no-knock warrants in federal drug cases outright and also limit qualified immunity for police officers to make it easier for citizens to sue the police. Most Republicans refuse to entertain the Democratic bill.

“And it is Congress’ duty to meet this movement by putting forth a solution that will achieve police accountability and take meaningful steps to end these horrific killings.”

The legislation was drafted by Sen. Tim Scott (R-S.C.) and other Senate Republicans after the police shootings of Breonna Taylor and George Floyd led to nationwide and eventually worldwide protests in favor of Black Lives Matter. The protests gained further traction when Rayshard Brooks was shot and killed at a Wendy’s drive-thru and Martin Gugino, 75,  fractured his skull when a Buffalo police officer shoved him to the ground during the same week in June.

Scott, the senate’s only African American Republican member, believes Democrats are taking advantage of African Americans and waiting until after the November elections when they could be in the majority to push their own version of the bill.

“I don’t know what it’s going to take to wake up our entire nation about the importance of a duopoly and not a monopoly,” Scott said. “Because look at your results. Look at the results we are getting.”

President Donald Trump said Democrats blocked the bill because”they want to take away a lot of our strength from our police and from law enforcement generally.”

Harris responded in a press statement saying the GOP bill gives departments more money at a time when most Americans want to decrease police budgets.

“Our country is demanding that we fundamentally re-imagine public safety and policing in America. Instead of responding to the demands of the people, Senate Republicans are offering billions more in funding for local law enforcement to preserve the status quo,” Harris said.

“Rushing more money to local departments to put more police on the streets is just wrong thinking and will not make our communities safer. Safe communities are healthy communities, and achieving healthy communities will require us to re-evaluate spending and invest in education, mental health, access to health care, job training, and affordable housing.”