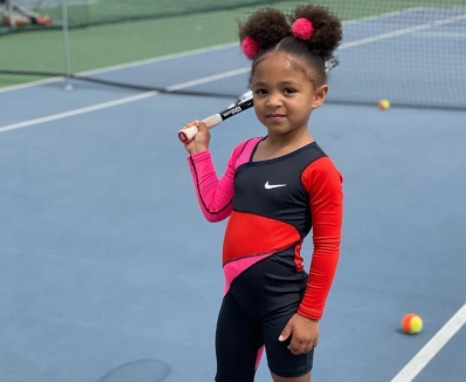 Olympia Ohanian wore a tennis outfit on her Instagram account that was similar to what her mother, tennis champion Serena Williams, wore at the Australian Open. (Image: Facebook)

Olympia Ohanian may be tiny, but she is already making a mark like her mom, tennis legend Serena Williams.

On her own Instagram account–where she’s described as an “Adventurer”–the little fashionista struck a pose in an adorable outfit that resembles Serena’s memorable attire that she wore at this year’s Australian Open.

Apparently, Olympia’s father Alexis Ohanian, Serena’s husband, did not honor Serena’s private request to save the shared post until she could pose in her catsuit next to their photogenic daughter.

“Awwwww mannnnnn I asked you to save this post until I was next to her side my side in my same outfit 🙄🙄. Oophhh I guess I’ll have to pull the plug from your phone tonight. And you wake up wondering why you have no battery 🤷🏿‍♀️🤷🏿‍♀️ LOL, “ Serena said in response to series of Instagram photos he posted.

The mother and daughter have worn similar outfits before. Back in March, Olympia participated in her first fashion campaign with her mother. Olympia’s role included dancing while twinning, right down to striking a similar pose at the end of the advertisement.

Where does Serena’s fashion inspiration come from? During a post- interview after the Australian Open last year, the tennis star said that the late track legend Florence Griffith Joyner has inspired her stylish presentation. At that time, she sported the Nike unitard on the court.

“This year we thought of what can we do to keep elevating the Serena Williams on the court.”

Serena, Olympia, and Alexis seem to embrace integrating fashion, branding, tennis and having a little family fun. And that is the stuff that sweet memories are made of.