Serena Williams Exits Wimbledon Heartbroken, After a Devastating Injury in the First Round

Tennis champion Serena Williams injured herself at Wimbledon while serving in the first round, per the Associated Press.

After slipping and losing her footing, Williams opted to take a medical timeout during the game, but she was unable to continue playing in pain against Aliaksandra Sasnovich of Belarus. The slip caused Williams to unexpectedly retire from the match. Fans cheered for her as she left the court teary-eyed.

“Of course, I am so sad for Serena,” Sasnovich said in the article. “She is a great champion. It happens sometimes in tennis. But all the best for her. Best recovery.”

Williams turned to Instagram to make a statement about her mishap on center court, where she slipped.

“I was heartbroken to have to withdraw today after injuring my right leg. My love and gratitude are with the fans and the team who make being on centre court so meaningful. Feeling the extraordinary warmth and support of the crowd today when I walked on—and off—the court meant the world to me,” Williams said.

Roger Federer—who is a men’s tennis singles champion—was both shocked and concerned about Williams’ fall and the slick, grassy surface, per ABC News story. The weather had been rainy, so the Center Court roof had been closed.

“I do feel it feels a tad more slippery maybe under the roof. I don’t know if it’s just a gut feeling,” Federer said in an ABC News interview.

The effort to win an eighth title at Wimbledon ceased, when the match ended suddenly, per ESPN. Williams’ coach commented briefly about what was wrong with the tennis champion’s leg.

“Apparently the injury is at the top of her hamstring, in the glute,” Patrick Mouratoglou, said in a text to ESPN’s Chris McKendry, according to the report.

Williams who has won four medals at the Olympics announced on Sunday that she won’t be going to Tokyo representing Team USA.

“I’m actually not on the Olympic list, not that I’m aware of,” Williams told reporters at Wimbledon on Sunday. “If so, then I shouldn’t be on it.” 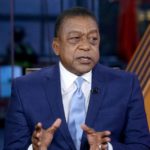 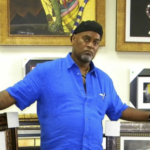