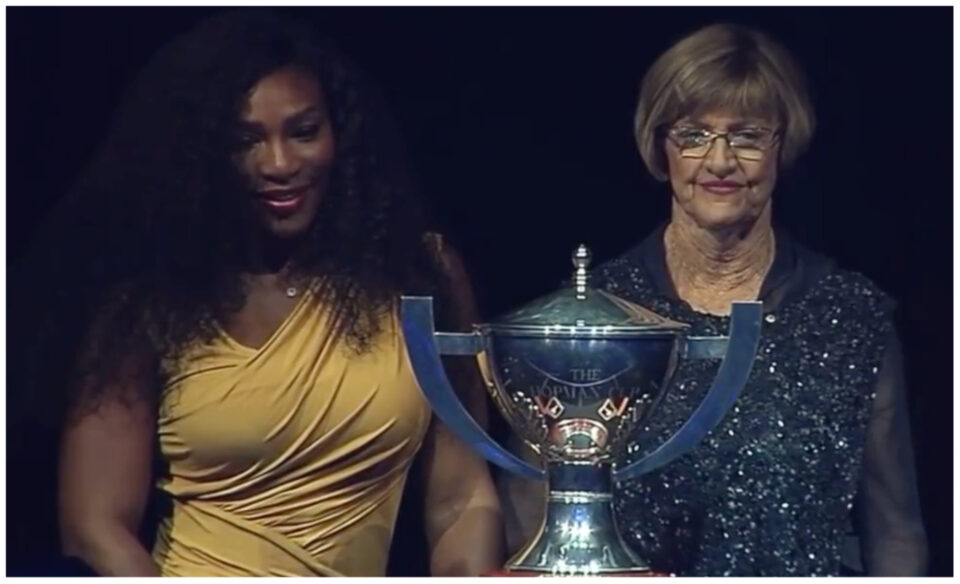 Twenty-three-time Grand Slam winner Serena Williams announced her departure from tennis in August before losing her last match at the U.S. Open on Sept. 2.

Williams is lovingly referred to as the GOAT, yet when the 24-time Grand Slam winner, 80-year-old Margaret Court was asked about Williams’ accomplishments, she made it about herself.

“Serena, I’ve admired her as a player. But I don’t think she has ever admired me,” she said to Britain’s Daily Telegraph.

“I would love to have played in this era. I think it’s so much easier. We didn’t have psychologists or coaches with us. It’s a whole different world. That’s what disappoints me — that players today don’t honor the past of the game.”

Court made it clear that she was somewhat jealous of how Williams is regarded, having captivated the world with her brains and brawn as one of the greatest players in the game’s history.

In fact, she still reigns on the green, and her last match against Ajla Tomljanovic was the most watched tennis match in ESPN history. And Court had plenty to say about it — and Williams.

“A lot of the press and television today, particularly in tennis, don’t want to mention my name,” said Court. “The honor has not been there for what I did do. In my own nation, I have been given titles, but they would still rather not mention me.”

Court also noted that Williams had played tennis longer than she did.

“Serena has played seven years more than I did,” Court said.

“I finished in my early 30s. People forget that I took two years out. I first retired … when I was 25, thinking I would never return to tennis. I got married, had a baby, but then had one of my best years, winning 24 out of 25 tournaments. I came back after two babies. After having the first baby, I won three out of the four Slams.”

She added that Williams “hasn’t won a Slam since” having a baby, a point no one asked her to inject into the conversation. However, Williams won her 23rd Grand Slam title, the Australian Open, while she was two months pregnant.

The Grand Slam record holder also accused Williams of not praising her opponent enough. “I thought it was bad that Williams didn’t mention her opponent more when she spoke,” Court said. “We were taught to honor our opponent. We respected one another.”

Court — who once praised apartheid in South Africa and made homophobic comments about 18-time Grand Slam winner Martina Navratilova — complained that she is rarely mentioned in the press.

Margaret Court’s unseasoned opinions about Serena Williams are something else https://t.co/M8htuwOjiA

Court also claimed that playing tennis was more difficult in her day, despite winning 11 of her Grand Slam titles playing against amateurs. Her remarks indicated that her memory may be lacking because Williams told Court to her face that she admired her back in 2016 at the Hopman Cup in Perth, Australia.

“I never dreamt I would be on a stage being next to my record so it’s just really kind of a little bit surreal but it’s just really an honor to even be mentioned among such an amazing champion like her and yeah, just have an opportunity to be healthy and play tennis and do something I love is also a real blessing.”