Serena Williams is Sports Illustrated's 2015 Sportsperson of the Year 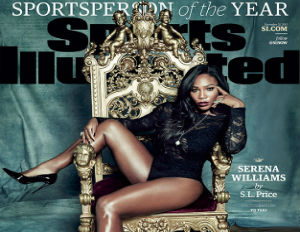 Serena WilliamsÂ was recently named the 2015Â Sportsperson of the YearÂ byÂ Sports Illustrated, a coveted title, from a dynamic lineup of 12 esteemed athletes.

In a statement, Sports Illustrated Group Editor Paul Fichtenbaum announced, “Serena has made a very strong case as not only the greatest tennis player of her generation but of all time, and after the string of performances she put together in 2015, she is one of the most dominant athletes playing today.”

Which is all true. The 34-year-old female tennis superstar has had one of the most vigorous years during her tennis career in 2015. She snagged herÂ 19th, 20th, and 21st Grand Slam titles, in addition to defeating sister Venus Williams at the U.S. Open. Despite physical injuries and health obstacles, she held the #1 ranking the entire season, for the fifth time in her career.

Since track star Mary Decker in 1983, Williams became theÂ first female athleteÂ to be honored with the title. “This year was spectacular,” Williams said in a statement. “ForÂ Sports IllustratedÂ to recognize my hard work, dedication, and sheer determination with this award gives me hope to continue on and do better. As I always say, it takes a village – not just one person. This is not just an accomplishment for me, but for my whole team and all my fans. I am beyond honored.”

The #SerenaWilliams domination continues. She’s now the #SportsIllustrated 2015 Sportsperson of the Year pic.twitter.com/Mbnji5sxwO