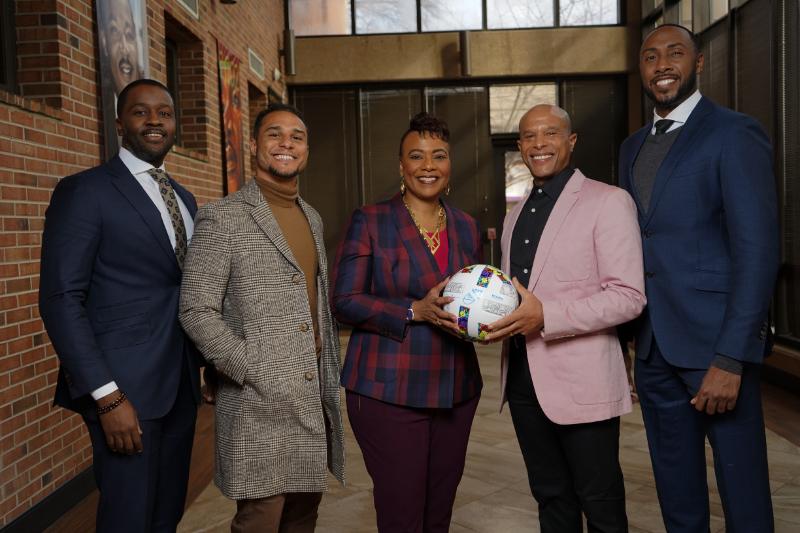 From left to right: Brandon Comer, Quincy Amarikwa, Dr. Bernice King, and Ashley D. Bell
Seven Black banks—including four of the nation’s largest—will provide $25 million in financing to Major League Soccer (MLS) aimed to help empower the Black community.
According to a news release,  the action marks the first time any sports league has taken part in a major commercial transaction solely with Black banks. Organized by the racial justice nonprofit National Black Bank Foundation (NBBF), the partnership is the most recent step in several continuing efforts by MLS in the diversity, equity, and inclusion arena.

Along with closing the Black-White economic disparity in America, the push is reportedly intended to compel others large organizations in the sports and business world to form similar partnerships.

Sola Winley, MLS executive vice president, and chief diversity, equity, and inclusion officer, tells BLACK ENTERPRISE that the money will be used for strategic investments and strategic priorities on behalf of the league.

“It has not been earmarked for a specific initiative or program, but more for our general specific priorities,” she says.

For the Black banks, the accord could help boost revenues. The transaction, along with the MLS’ strong credit rating, will boost the “banks’ capital cushion through fees and interest earned,” according to the news release. That is expected to create more capacity for new lines of credit for home and small business loans in communities of color nationwide.

Citizens Trust, Carver Federal, Mechanics & Farmers, and Unity National Bank are on the latest BE Banks list of the nation’s largest Black-owned banks.

The MLS deal is needed. Several Black banks in recent years have faced ongoing obstacles, including capital-raising challenges and uneven profitability. The most recent figures show there are just 19 Black banks in America as of the fourth quarter of 2021, according to the Federal Deposit Insurance Corp. That number is down from a robust 48 in 2001.

“Major League Soccer has raised the bar for corporate America with this transformative partnership,” NBBF co-founder and general counselAshley Bell said .”If other leagues and major corporations follow the MLS model, lives of Black families all across this country will change for the better because their local Black bank will have the capital resources to approve historic numbers of home and small business loans.”

With assets now of about $680 million, the MLS commitment from Citizens Trust comes after the bank celebrated its 100th-anniversary last year.