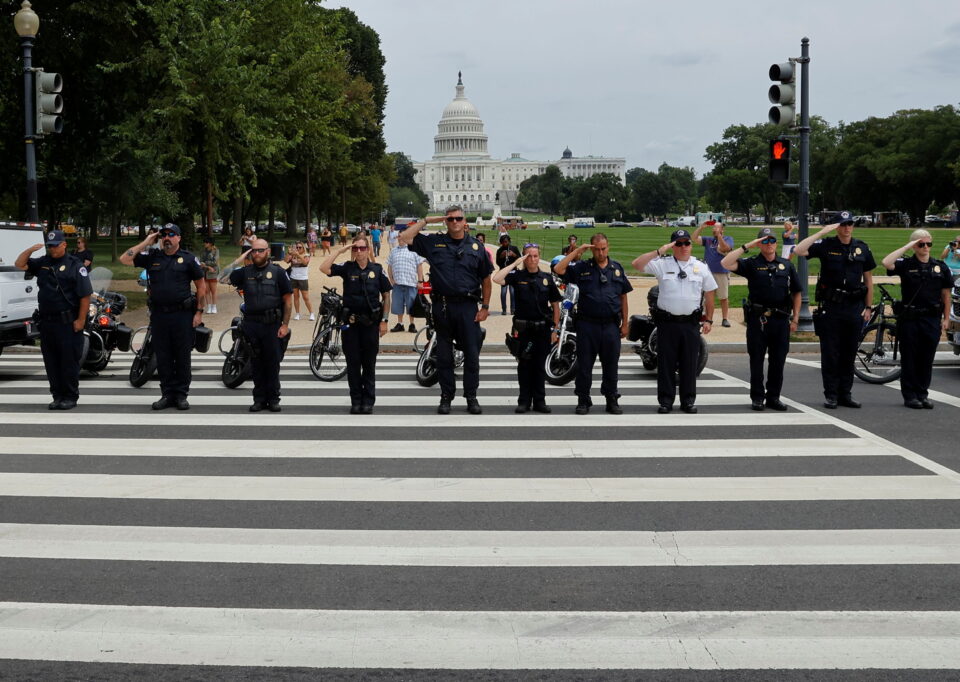 FILE PHOTO: Law enforcement officers from Washington's Metropolitan Police Department, the U.S. Capitol Police, the Pentagon Force Protection Agency and other police departments salute as a ceremonial procession in honor of a police officer wounded in a shooting at the Pentagon earlier in the day passes the U.S. Capitol in Washington, August 3, 2021. REUTERS/Jim Bourg

The officers in a lawsuit filed in Washington, D.C. federal court allege the attack was the culmination of months of rhetoric from Trump, who they say knew of the potential for violence on and actively encouraged it in hopes of halting the certification of President Joe Biden’s election victory.

The lawsuit alleges Trump conspired with the extremist groups The Proud Boys and The Oathkeepers, as well as far-right political operatives including Roger Stone and Ali Alexander, who promoted Trump’s speech near the White House right before the Capitol attack.

“Trump, in concert with other Defendants, deliberately and persistently made and encouraged false claims of election fraud to discredit the outcome of the election and disingenuously incite outrage among his supporters,” the lawsuit alleged.

The case is the latest in a string of civil lawsuits seeking to hold Trump accountable for the siege of the Capitol by a mob of his supporters.

Four people died on the day of the violence, one shot dead by police and the other three of natural causes. A Capitol Police officer who had been attacked by protesters died the following day. Four police officers who took part in the defense of the Capitol later took their own lives. More than a hundred police officers were injured.

Ron Fischetti, a personal lawyer for Trump, did not immediately respond to a request for comment.

In a similar lawsuit filed by Democratic U.S. Representative Eric Swalwell, Trump has argued that his actions were free speech protected by the First Amendment of the U.S. Constitution and that he cannot be held liable under U.S. civil law because he was acting within his capacity as president on Jan. 6.