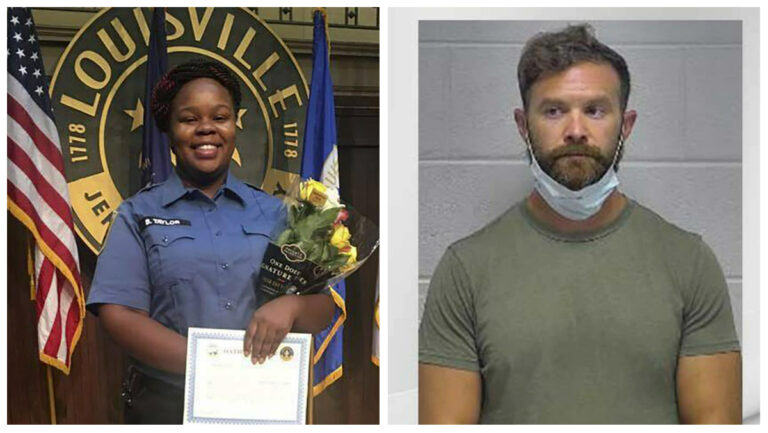 The wheels of justice are finally turning for Breonna Taylor.

A police officer involved in the botched raid has been terminated from the Louisville Police Department.

According to the Courier-Journal, Sgt. Kyle Meany was fired last Friday for his role leading up to Taylor’s death. This takes place less than a month after the FBI charged the four police officers (Joshua Jaynes, Sgt. Meany, Brett Hankison, and Kelly Goodlett).

Meany, who was on the police force for less than a decade, was terminated after meeting with Police Chief Erika Shields last Friday.

“I made the decision to terminate Sgt. Kyle Meany after careful consideration and not with ease,” Shields said in a written statement.

“I fully respect the judicial process and realize Sergeant Meany has yet to be heard before a jury of his peers. That being said, he is facing multiple federal charges after a lengthy investigation by the DOJ [U.S. Department of Justice]. As an employer, the character of our organization is paramount and it is not reasonable to expect continued employment under such conditions.”

Meany has been accused of knowing that the affidavit used to get the warrant was based on false information.

He was indicted for federal civil rights and obstruction offenses for “preparing and approving a false search warrant affidavit that resulted in Taylor’s death.”

Last week, BLACK ENTERPRISE reported that former Louisville Metro Police Detective Kelly Hannah Goodlett, 35, will plead guilty to one count of conspiring to violate Taylor’s civil rights by helping falsify an affidavit for the search of her apartment in March 2020, Courier-Journal reported.

The tragic incident occurred after police officers entered Taylor’s apartment on a no-knock warrant while she and her boyfriend, Kenneth Walker, were in bed sleeping. Walker, a licensed gun owner, maintains that plainclothes officers entered their home unannounced and that he called the police and fired a warning shot in self-defense, thinking they were intruders. As a result, one of the officers was shot in the leg. The cops then responded with a hail of bullets that killed Taylor.

“Among other things, the federal charges announced today allege that members of LMPD’s [Louisville Metro Police Department’s] Place-Based Investigations Unit falsified the affidavit used to obtain the search warrant of Ms. Taylor’s home, that this act violated federal civil rights laws, and that those violations resulted in Ms. Taylor’s death. Breonna Taylor should be alive today. The Justice Department is committed to defending and protecting the civil rights of every person in this country. That was this Department’s founding purpose, and it remains our urgent mission.”