Sha'Carri Richardson Comes for Allyson Felix, Black Twitter's Had Enough and Hits Back 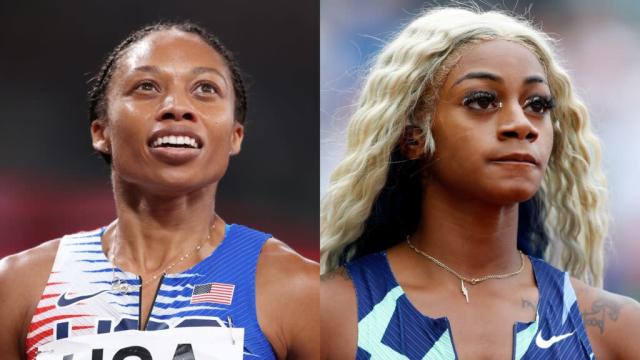 Track star Sha’Carri Richardson may have never had the chance to run her race at the Olympics, but Black Twitter says she is running her mouth, and this time she “goin’ get this lesson.”

Allyson Felix, the most decorated Olympian ever, appeared on Jimmy Kimmel Live! and asked fans and athletes to support Richardson, who has been receiving backlash for coming in dead last after racing in the Prefontaine class. People have also been giving her flack over her failed drug test that prevented her from competing in the Tokyo Olympics.

Felix said, “I know that she’s obviously been through so much and I hope that she’s just supported. I hope people rally around her,” She added, “Obviously, she has a great personality and she’s brought a lot of attention to the sport and I think she’ll be in the sport for a very long time.”

Felix went on to say, “I think just more than anything, for all athletes, there’s so much that goes into it. Just give her the support that she needs.”

Richardson, 21, did not thank Felix, but instead used the opportunity to go on Instagram and say, “Encouraging words on TV shows are just as real as well nothing at all,” she wrote.

Black Twitter took that as shade and sounded off by coming to Felix’s defense, saying Richardson lacks tack, humility and sportsmanship.

Black Twitter Had Sha'carri’s Back & Now She Wanna Disrespect THEE Allyson Felix? Who May Have Not Personally Called You But At Least Showed Support For You On National Television?? Tuh pic.twitter.com/DGkEkhghWE

This is the woman y’all stan on twitter. pic.twitter.com/vpPfjM1aPp

To add insult to the whole ordeal, it is being reported that Richardson liked an offensive, xenophobic tweet about Jamaicans.

“Not y’all Jamaicans still talking s*** when y’all gotta walk barefoot to your coconut stand everyday for a living,” the post says.

Richardson had already made Black Twitter mad when people claimed she got “smoked” for coming in ninth place in her latest race. But Richardson made sure to respond, “talk all the sh** you want, Because I’m here to stay. I’m not done, I’m the sixth fastest woman in the game ever. Can’t nobody take that from me,” she said.

It is unclear what sort of relationship Felix and Richardson have. Felix has not responded.