'Shaft' is NOT a Comedy 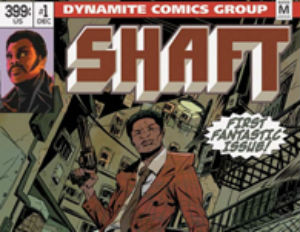 Not everyone is happy with the creative direction of the new Shaft remake. According to The Hollywood Reporter, David Walker, author of Shaft’s Revenge and writer of the Shaft comic book series by Dynamite Entertainment, has penned a hyper-critical open letter to the film’s creative team – part of which includes Black-ish creator Kenya Barris and The Goldberg’s writer Alex Barnow. Walker takes issue with the team’s decision to take a comedic route with the movie, rather than make it a dramatic work similar to other films with black leads, such as The Equalizer with Denzel Washington, which grossed over $100 million.

In his letter, Walker compared the proposed comedic version of Shaft to box office flops likeÂ Black Dynamite – which starred actorÂ Michael Jai White and brought in less than a million dollars – and other underperformers like A Low Down Dirty Shame and Undercover Brother.

Here’s some of what Walker had to say:

“Let me start by saying that I never expected anyone to get in touch with me about the new Shaft movie. Likewise, I don’t have any interest in getting involved with anyone who doesn’t understand or respect Ernest Tidyman’s character, so even if anyone involved in the new movie got in touch with me, it probably wouldn’t go well. As it is, with the recent announcement that the creator ofÂ Black-ish has been hired, and that a comedic approach is going to be taken, it is clear to me that New Line is more interested in shitting the bed, than making a goodÂ Shaft movie.”

“There are several valid reasons to back up the fact that taking the comedic approach is wrong. Let’s start with the reason that means the most in Hollywood–money. While comedies do well, the sort of comedy you’re likely to make does not have a good track record. Low Down Dirty Shame (1994) made $24 million, Undercover Brother (2002) made $39 million, and Bait (2000) made $15 million. There are, of course, exceptions, like the Bad Boys movies, which made just under $400 million collectively, but c’mon … can you really conjure the magic of Will Smith and Martin Lawrence, and hope for that kind of hit? I don’t think so.”

Walker also emphasized the recent instances of social injustice in the black community as grounds for making a serious Shaft film rather than a comedic one.

“As of this writing, in the month of July 2015, more than 100 people in the United States have been killed by the police. That’s not the number for the year-to-date, but just one single month. And that doesn’t include people like Sandra Bland, who died while in custody. Police brutality has reached epidemic proportions, and white supremacists seem intent on pushing this nation toward a violent and deadly racial conflict. Last month, an armed white man walked into a church, and massacred nine black people. Not since the 1960s has there been more of a need for a black action hero–one that can provide a cathartic escape from life’s day-to-day horrors, and deliver the sort of wish fulfillment that cinema is intended to do. Not since Ernest Tidyman created John Shaft back in 1970 has there been more of a need for someone just like him. And yet your solution is to take the most iconic hero in the history of black popular culture–something that is missing from the cinematic landscape right now–and turn him into some kind of comedic figure.”