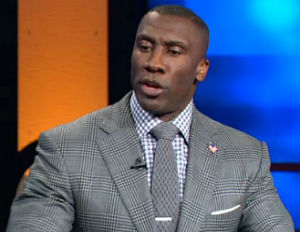 Shannon Sharpe was assertive and emotional regarding the subject of the locker room culture of the Miami Dolphins.

Shannon Sharpe has never been shy about speaking his mind. But his rant regarding Richie Incognito’s use of the ‘n-word’ in the Miami Dolphins locker room — an act that apparently went unchecked by players in the Dolphins’ locker room — has gotten the attention of just about everyone who covers the sports media.

Sharpe, addressing the Jonathan Martin-Incognito story that has gained national attention, was animated and emotional when it came to allegations that Incognito had used racially-charged language with other black players present.

“I’m 45, I grew up in rural south Georgia. Just ask your parents, ask your grandparents. The mountain that they climbed so a black person in America can have respect, can have dignity. And you allow this, in an open locker room to take place, is unacceptable. I’m so disappointed. I just hope that someone was misquoted.”

Jonathan Martin, a 24-year-old offensive lineman for the Dolphins, left the team on or around Oct. 28, citing mental fatigue from hazing and apparent bullying. The NFL Players Association began an investigation into the matter, and on Nov. 3 Incognito was suspended from the Dolphins for conduct detrimental to the team.

Sharpe suggests a lack of leadership is to blame.

“I hope I’m wrong and they didn’t allow Incognito to say this racially charged word in a locker room and go unchecked. I’m embarrassed. If he said that to Jonathan Martin, he didn’t only say it to him, he’s talking to you too. Because if you’re black, you know what that word means.â€

Sports Illustrated media columnist Richard Dietsch, sometimes a staunch critic of Sharpe’s, gave he and CBS credit for its handling of the story on the NFL Today, writing Sharpe was as good as he’s “ever been on the show.”

“Particularly worth noting were Sharpe’s comments on race, the ‘n-word’ and locker room dynamics,” Dietsch wrote. “I don’t think Sharpe (and this column has certainly been critical of him in the past) has ever been better than he was this week.”

Sharpe was inducted into the Pro Football Hall of Fame in 2011. Check out the entire clip here: