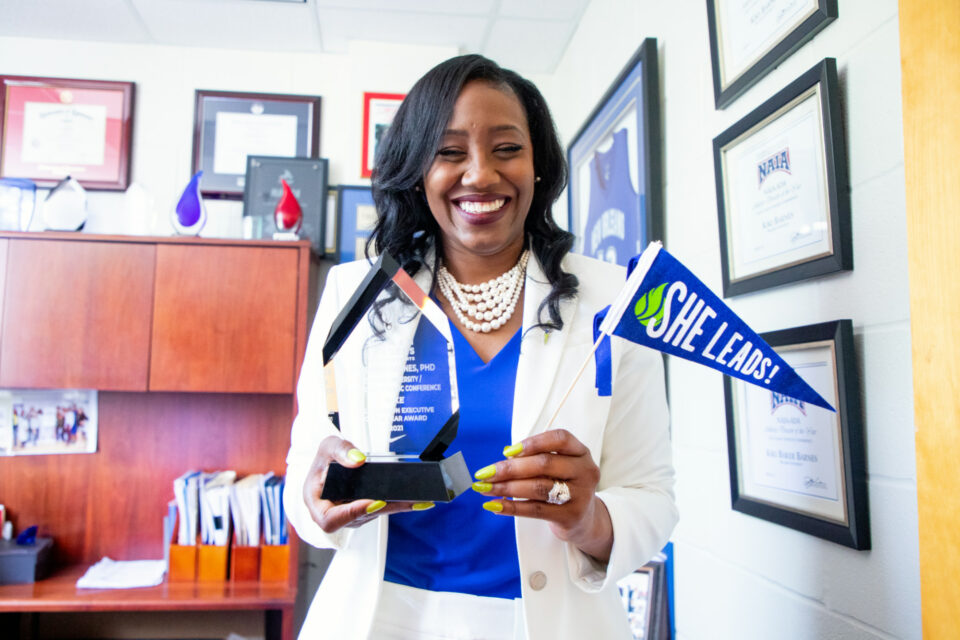 Dr. Kiki Baker Barnes, a transformative leader in her previous role at Dillard University, is now stepping into a trailblazing role to create opportunities through sports for generations to come on a national level.

According to Crescent City Sports, Baker Barnes is transitioning from her athletic director position at the New Orleans HBCU into her newly appointed role as the first Black woman commissioner of the Gulf Coast Athletic Conference (GCAC). This historic achievement was announced in March.

The conference comprises members representing historically Black colleges and universities and is only one of five in the United States across all intercollegiate sports made up of HBCU institutions.

“I am honored to have earned the trust and confidence of my colleagues for the purpose of leading the Gulf Coast Athletic Conference into the future,” Baker Barnes said, as per the outlet.

“My commitment is to bring creative vision, excellence, direction, and strong partnerships that will advance the conference and the competitive landscape for our student-athletes. As I embrace this new opportunity, I am especially grateful to my colleagues, staff, and student-athletes at Dillard University for our collective work in rising from adversity to winning championships and becoming a national model of student-athlete success.”

Baker Barnes is departing from Dilliard University after 16 years, where she was named interim athletics director and head coach of the women’s basketball team in 2006. Her contributions were celebrated during the campus’ long battle to recover after Hurricane Katrina. She is responsible for establishing three new sports teams and the first athletics endowed scholarship, among her many feats.

“During Women’s History Month, it is fitting that we celebrate Dr. Kiki Baker Barnes. She made history as the first female and Black president of the Gulf Coast Athletic Conference and as the first Black woman commissioner in the National Association of Intercollegiate Athletics,” said Dr. Roderick L. Smothers Sr., Philander Smith College President and Chairman of the GCAC Council of Presidents.

The self-proclaimed athletic strategist is no stranger to the commissioner’s duties for the GCAC.

In 2019, the GCAC Council of Presidents appointed Baker Barnes to serve as interim commissioner of GCAC—a position she has held while simultaneously maintaining her dedication to Dillard.

Throughout her career, Baker Barnes has taken pride in elevating women athletes. In her new position, she strives to transcend her mentoring and coaching experiences and achievements beyond athletic programs.

“It’s about them knowing that it’s possible,” Baker Barnes previously told Sports Illustrated. “And I feel like because of my path, I have an obligation to ensure they are aware of what those opportunities look like and how they can successfully navigate and achieve their goal in leadership.”

She continued: “Each person has a unique thing about them that makes them powerful. We each have our own way. I’m Kiki, and ain’t nobody better at being Kiki than me. You can’t win. You’ll never win because this was the way I was created to lead and to make a difference in this world.”

Baker Barnes will officially assume the permanent commissioner role at the end of the academic year, according to a GCAC press release.