ShearShare Founders Kill It at Startup Grind in Silicon Valley

ShearShare Founders ‘Kill It’ at Startup Grind in Silicon Valley 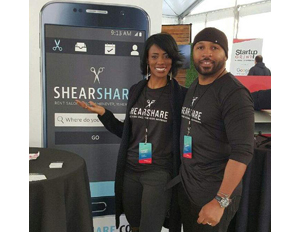 “Overall, being part of the inaugural Startup Grind Startup Program was a phenomenal experience! The connections made (investor, partner, press, etc.) and the ability to address a room full of potential customers en masse would not have been as easy had we not been part of the program,â€ says Courtney.

Startup Grind is an independent organization that mentors startups; helps them connect to partners; reach users; and seek funding. It’s connected over 200 startup founders in over 185 cities worldwide and partners with prestigious groups including Google for Entrepreneurs.

ShearShare was one of only 20 startups from the program selected to pitch on the main stage at the event.

“We had 60 seconds to address the audience, and we crushed it!,â€ says Courtney. “We opened up for Aaron Levie, co-founder and CEO of Box!â€

During the two-day event, the Caldwells were able to take meetings with five investors. They were also invited to apply to 43North, an accelerator/incubator program that awards up to $5 million in capital.

For Courtney and Tye, the connections made at Startup Grind’s Startup Program were invaluable.

“In less than 72 hours, we had listings in 14 cities and 2 countries. We even signed up a California salon on Day 2 of the conference,â€ Courtney says.

The ShearShare app connects beauty stylists to salon owners who have booths to rent in their shops. The app officially launched on February 21Â on Google Play.

“Huge kudos to Ms. T.D. Lowe, the Startup Grind Startup Program Coordinator! She made every startup feel like a million bucks and helped to expose our brand to an audience we wouldn’t have been able to tap otherwise,â€ says Courtney.

“Tye and I are looking forward to growing ShearShare and helping cosmetologists and salon owners everywhere build their business behind the chair! We’re just getting started.â€