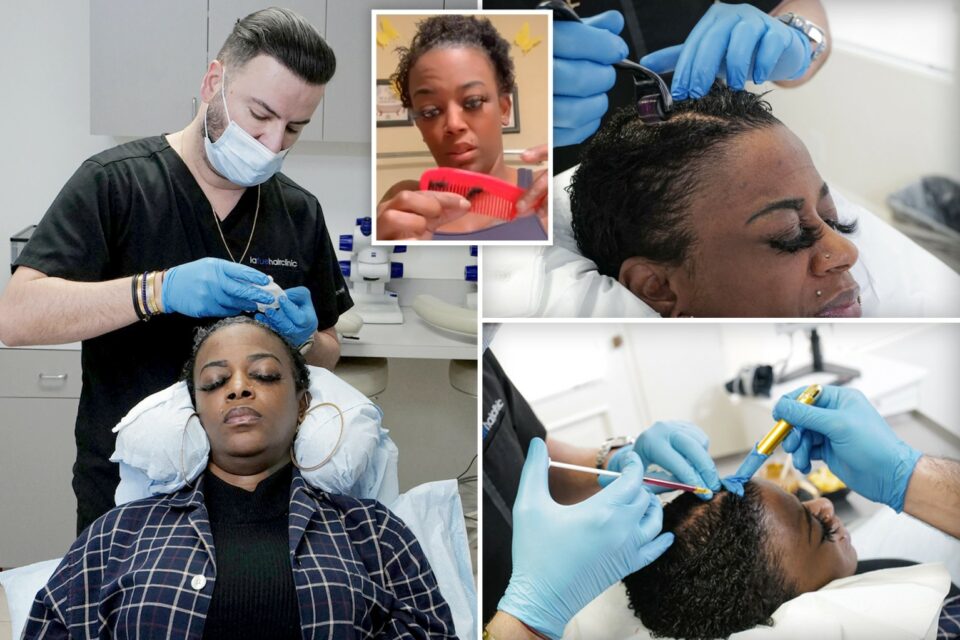 Tessica Brown is wearing the internet out!

The woman who became a viral meme for her in-your-face account of how her hair would not move because she used Gorilla Glue adhesive to keep it laid, resulting in a disaster, had yet another baffling debacle. This time, she dyed her hair and the strands she had left decided to leave and fall out.

Now Brown says since her hair came out in clumps, she took the proactive steps to save her straggling strands. So the Louisiana native traveled to La Fue Hair Clinic in Pasadena, California to undergo stem cell and platelet-rich plasma therapy, performed by Dr. G. Kevork Abrahamian and hair specialist Jacques Abrahamian, the NY Post reports.

“I’m just praying that it works,”  the mother of five told the outlet about the ordeal on Dec. 8.

In case you missed it, the social media star who became a viral sensation due to her stiff Gorilla Glued ponytail, recently took to social media to share a video showing what happened after she dyed her hair. Basically, this time she’s on her way to being bald.

“I REALLY THOUGHT MY HAIR WAS STRONG ENOUGH FOR CHEMICALS I DYED MY HAIR IN THIS HAPPENED,” SHE CAPTIONED HER VIDEO TESTIMONIAL.

Brown is encouraged by the specialists who expect the stem cell therapy to revitalize her hair follicles.

“PRP uses her own growth factors and platelets found in her blood that heals and rejuvenates the follicles,” Jacques said in a phone call with The Post ahead of Brown’s appointment. “The other procedure is stem cell therapy, the king when it comes to natural healing and repair,” he said.

Jacques  explains, “We mix the PRP and the stem cells, and we inject it using a very fine needle to the areas that have been damaged.”

He also noted, Brown’s therapy treatment will “promote new hair growth and expand the life cycle of the existing hairs that she has.”

According to the specialist, Brown will see hair growth accelerate in six to nine months.

In the meanwhile, somebody needs to take her glue, scissors, dye, comb, brush and cell phone away so we can have some peace. And if she can’t do that, just wear a wig sis.