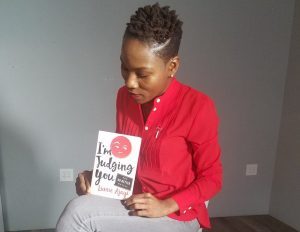 It’s official–Luvvie Ajayi’s best-selling book,Â I’m Judging You: The Do-Better Manual, will be transformed into a cable comedy series by the Queen of Thursday night’s herself, Shonda Rhimes.

For those who don’t know,Â Ajayi is a writer, cultural critic, and the creator of the wildly popular blog AwesomelyLuvvie.com, which she began in 2003. Her blog is most noted for her original recap articles on Scandal, which even gained the attention of Rhimes.

In September, the self-described “Side-Eye Sorceress” released her first book,Â I’m Judging You,Â whichÂ uses wit and shade to instruct people on how to do better in a collection of essays on race, politics, and pop culture. By no surprise, the hilarious manual debuted at No. 5 on the New York Times best-seller list.

BE’s very own Editor-At-Large Alfred Edmond Jr. described I’m Judging YouÂ as “a great read chapter by chapter; perfect for passing time on daily commutes via public transportation. However, if you’re like me, you won’t be able to resist reading Ajayi’s brilliant effort in one sitting. Lots of authors want you to believe they’ve produced a work that is nearly impossible to put down once you’ve begun reading. Ajayi simply delivers, and then dares you to say something.”

On Wednesday, Deadline reported thatÂ Rhimes’ Shondaland production company acquired the rights to Ajayi’s book and will translate it into a scripted comedy for ABC Studios.

Other shows produced by Shondaland include ABC’s hit drama series Grey’s Anatomy and How to Get Away with Murder. In addition, Rhimes’ company is now looking to expand by producing television shows on ABC’s cable network.