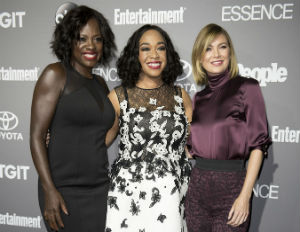 OK,Â that headline may be a little misleading as there is no way that Shonda Rhimes isn’t queen of Thursday or any other day of the week that a show of hers graces the small screen, but her Thursday Queendom may have shrunk a bit–if only for a limited time.

Here is the skinny:

This fall, Scandal is no longer sandwiched between Grey’s AnatomyÂ and How to Get Away With MurderÂ on Shonda Thursday (yes, it’s called that). It will now be replaced by the new ABC drama, Notorious, starring Piper Perabo (Covert Affairs) and Daniel Sunjata (Graceland). The reason? Kerry Washington is pregnant.

This shift comes as a bit of a shock to most Shondaland lovers who eliminate all plans, silence all parties, and cozy up for a full night of guaranteed entertainment, each and every Thursday by way of Rhimes’ television hit-making. Now what?

Well, fret not, Shondaland lovers, as ScandalÂ will return to the Thursday line-up mid-season (sometime early 2017), and order will be restored.

Don’t think for one second that Rhimes has lost any part of her magic touch or your thoughts would be completely and utterly WRONG. Though Thursday may have slipped through her fingers, ABC network, as a whole, has not. In fact, Rhimes just tightened her grip on the network with her fifth, yes, FIFTH, Shondaland show, The Catch, which debuted on ABC Thursday, March 24th at 10 p.m., taking over the slot of How to Get Away with Murder, as it’s concluded its second season.

Thus far, the show has been subjected to mixed reviews, but if we’ve learned anything at all from reviews, it’s that they’re untrustworthy and in order to really know what’s good out there, you have to see for yourself.

According to Channing Dungey, ABC’s newly appointed president of entertainment the plan for midseason on Thursday is to return ScandalÂ at 9 p.m. and slot the second season of Â The CatchÂ at 10 p.m. after How to Get Away with MurderÂ ends its run.

So, yes, misleading headline. Shonda is still, and always will be queen, the queendom is simply under construction.