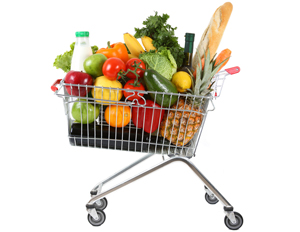 These days, enjoying deep savings when grocery shopping requires more than coupon clipping. There are numerous ways to net supermarket savings without going the coupon route. Use these tips and insider knowledge to save on grocery staples, either by capitalizing on store pricing policies or bypassing the supermarket altogether.

Shop the Dollar Store
Put dollar stores in heavy rotation for pantry staples and supplies for year round festivities. While the dollar store doesn’t naturally come to mind for groceries, shoppers will find deals on packaged goods such as oatmeal and pancake mix. A recent Cheapism.com investigation found that essentials such as aluminum foil, cereal, dish soap, sugar and spices, were priced lower at the dollar store than at Walmart.

Freeze Staples
The freezer can be a thrifty consumer’s best friend. Keep an eye out for buy-one-get-one-free deals and other discounts and stock up at the supermarket bakery and in the dairy aisle, refrigerator case, and even the produce department. Freeze the surplus and thaw when needed. Bread and blueberries stay fresh in a deep-freeze state for up to one year, milk for three months, butter for six, and fresh orange juice for four.

Buying Generic or Store-Brands
Stocking up on flour, sugar, baking soda, and fruit juices is a sure way to save money. Many supermarkets charge upward of $10 for vanilla extract but sell vanilla flavoring for a dollar or two and, in taste tests of baked goods, there was no discernable difference.

Buy Milk at Convenience Stores
Shop around for the best bargain when it comes to milk. Convenience stores and drugstores may charge 30 to 50 cents less than grocery stores for a gallon of milk, according to a tip from Reader’s Digest. These stores lure shoppers with low prices on staples in hopes they’ll stick around and buy more items with higher margins.

Resist the Urge to Fill Your Shopping Cart
Shopping carts are getting larger because testing reveals that their size encourages customers to buy more. Make a conscious effort to not fill an enormous cart, or grab a basket instead of a cart whenever possible.

Purchase Cereal in Early Fall
AllYou magazine points out that cereal companies offer coupons and promotions in the fall (primarily September and October) to accompany the start of the school year. Take advantage of the offerings and buy multiple boxes. Check the expiration dates when purchasing, but unopened packages should stay fresh for months.

Cut a Whole Bird
A whole chicken is a cheaper cut of meat than pre-cut poultry portions. Net savings of about $1 a pound by doing the carving yourself. You can also buy a larger cut of meat and have the butcher trim it for you. For example, you might try purchasing one big roast and having the butcher remove the bone for soup, run half of it through the grinder for hamburger, and cut the rest into a pot roast. That can save you about 30% compared with buying everything already cut.