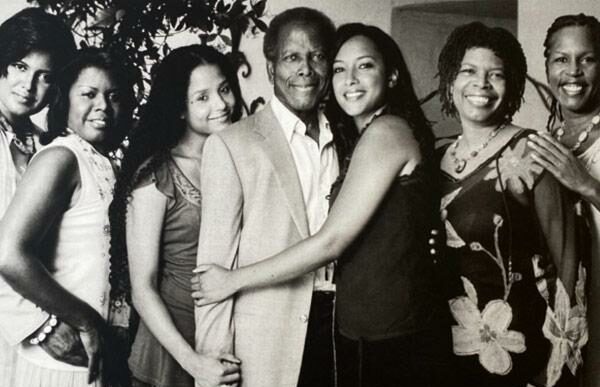 As the entertainment community continues to mourn the loss of Sidney Poitier, many of his fans can take comfort in celebrating his long career.

Poitier was a trailblazing actor who brought immense integrity and dignity to the roles he played. He made history as the first Black actor to win an Oscar in 1964 for Best Actor for Ralph Nelson’s comedy-drama Lilies of the Field. However, his most notable role was being a father to his six daughters, Beverly, Pamela, Sherri, Gina (who died in 2018), Anika, and Sydney.

His first four girls came from his first marriage to Juanita Hardy, and the relationship lasted from 1950 to 1965. Anika and Sydney, born from Poitier’s marriage to current Canadian actress Joanna Shimku, often attended Hollywood events with their father and carved out their careers in Tinseltown. Sydney is a prominent actress, and Anika directs.

In an interview from 2000 with Oprah Winfrey, Poitier revealed that he was “a little hard” on his children but in a constructive manner.

“In what I expect and demand of them in terms of values. My children respect my values, and I can see some of those values in them. That pleases me because my values are not constricting. They are human values. My kids are quite intelligent—all six of them,” Poitier said to Oprah in their sit-down interview.

The professional acclaim Poitier achieved in his career pales compared to his daughters’ admiration.

“After I won the Screen Actors Guild award [for lifetime achievement], one of my daughters said to me, ‘You’re pretty good, Dad.’ Now, this is a kid who most of the time thinks I’m just an old fuddy-duddy, so I know when she says things like that, she’s saying a lot more,” said the revered actor.

To celebrate the stellar legacy of Sydney Poitier, BE compiled a gallery of pictures to highlight the time he spent with his family.

Sidney Poitier poses with his daughters