Black Chamber of Commerce Spotlights Blacks in Business and Tech 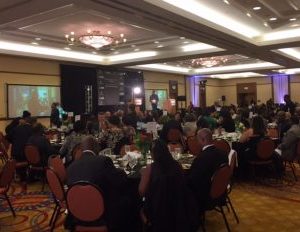 The Silicon Valley Black Chamber of Commerce hosted an eventful evening of leaders that included awards for some of the best and brightest in the categories of business and technology. The event was MC’d by spoken word artist, Prentice Powell, who is known for his powerful speech, “Good Father,â€ delivered on the new Arsenio Hall Show.

His charismaticÂ MC skills were intertwined with several high-powered achievements, including the Legacy Award that went to Frank S. Green Jr., a venture capitalist, electronics technologist, and high-tech business executive, who passed away December 26, 2009; the Achievement Award for the next Generation of Excellence, that went to Erik Moore, the founder, managing director, and a partner at Base Ventures; the Spirit of Excellence Award in Business, which went to Lloyd Carney, CEO of Brocade; and the Spirit of Excellence Award in Technology, which went to Shellye Archambeau, the CEO ofÂ MerticStream Inc.

Lloyd Carney had a very solid takeaway on how minority business leaders could help blacks get more involved in business and technology in Silicon Valley. “There are a lot of tech companies in the Valley who actually want to help. It’s a matter of us, the leaders who run these companies, to ensure that our people know that there are opportunities,â€ Carney told Black Enterprise.

In between the eloquent series of recognitions, Elroy R.C. Smith, the operations and programming manager of KBLX and KRBQ (Q102), gave a powerful keynote speech on integrity. “I had a boss that was paying me a lot of money. We had an internship program in the programming department, and his daughter was a part of that program. She missed two weeks, and my boss asked me to sign-off that she’d completed the program. I declined. I knew, at that point, I could have put my job in jeopardy, and that was okay. I wasn’t willing to compromise what I knew was right.â€

Between powerful speeches and words of wisdom, the audience didn’t lack their own influential appeal. Change makers scoured the room, and they were equally as qualified as those on stage. Notably, Andree Driskell, oneÂ the few early black female engineers, formerly at Hewlett-Packard, and the Honorable Teresa D. Cox, advisor to the U.S. Department of Trade and Commerce. In addition to that, Cox was the first African American female with a nuclear engineering degree in the nation.Â

All in all, it was a successful evening, which concluded with a powerful recognition of Roy Clay Sr., a Silicon Valley technology pioneer, who was a key figure in the development of Hewlett-Packard’s computer division in the 1970s, and served on the Palo Alto City Council two of those years as vice mayor. Still going strong, Roy spoke about the progressive change that he has seen over the years, with blacks in business and technology and how thankful he is for the Silicon Valley Black Chamber of Commerce, which continues to help implement and support that change.