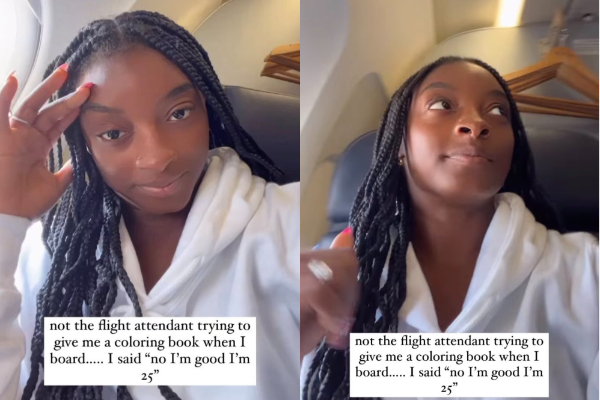 They say, ‘Black don’t crack.’ But Simone Biles’ beauty is so ageless that she’s often mistaken for a child.

The seven-time Olympic gold gymnast was in Washington DC, where she was awarded the Presidential Medal of Freedom on Thursday. On her flight home, Biles said a flight attendant mistook her for a child, Unilad reports.

“Not the flight attendant trying to give me a coloring book when I board… I said ‘no I’m good, I’m 25,” she captioned the post.

“The other flight attendant gave me a mimosa so we’re in the clear,” she added.

At 4’8” and with a fresh face, Biles appears accustomed to being mistaken for a minor. But considering her résumé, celebrity status, and the giant diamond engagement ring on her finger, there are enough details to determine her adult status.

The post went viral after it was shared on Twitter by one user “crying” at the decorated gymnast being handed a coloring book.

i’m crying at the thought of a flight attendant giving simone biles the most decorated gymnast in history a coloring book because she is 4’8” pic.twitter.com/s03QHpUUH8

“I would’ve taken it,” one user wrote. Another user who is also short-framed like Biles said she and her daughter hate when people say, “‘You’re so cuuuute!” And then they try and PICK YOU UP! I swear it’s the truth,” the user wrote.

Biles is tied for the most decorated gymnast in history and was in the nation’s capital as one of 17 people honored with the Presidental Medal of Freedom, NY Post reports. The decorated athlete is now the youngest recipient of the highest civilian honor a president can bestow.

When receiving the honor from President Joe Biden, Biles joked that she would have to find space for the medal among her 32 Olympic and World Championship medals. Other honorees include soccer star Megan Rapinoe, actor Denzel Washington, and Apple’s late co-founder, Steve Jobs.