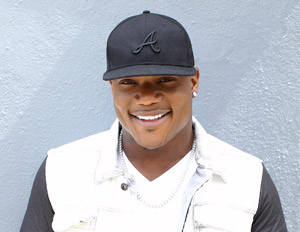 If for some reason you don’t know Sean Garrett by name, you undoubtedly know him by his work. Having penned massive hits such as Usher‘s “Yeah,â€ Ciara‘s “Goodies,â€ and multiple songs for superstars like BeyoncÃ©, among others, Garrett has cranked out an impressive 17 No. 1 singles, and 39 top 10 hits in his career so far, making him one of the most sought after singers/songwriters of today.

Growing up in a military family, Garrett traveled the world, soaking up different cultures, customs, and ways of thought. “It definitely shaped me,â€ he says of his unique upbringing, which included fluency in multiple languages and friends from several continents. “My parents never let me lose who I was… I speak proper English, but I still have that street edge to me.â€

Perhaps it was this street savvy, mixed with an expansive mindset, that allowed the talented crooner to succeed where others may have caved to pressure or feelings of inadequacy. In 2001, a then 23-year-old Garrett found himself with a respectable place in the music industry, but as a father to a young child he was struggling to make ends meet. But rather than be prideful by refusing to stray from his chosen path of music, Garrett humbled himself and decided to take on a second job outside of the entertainment industry, temporarily supplementing his income as a mortgage broker in South Carolina. “I’m a man that values what the original man was about–protecting and taking care of my responsibilities,â€ he says of his decision. “I don’t pass excuses.â€

And as it turns out, Garrett’s brokering gig wasn’t all that much unlike his role within the music industry. While many wouldn’t see the connection, the songwriter was able to maintain his morale by seeing all of the positives associated with his temporary job. “I had to pay bills and I know success comes in all forms and fashion. What makes me successful is that I’ve learned to have a positive attitude regardless. I was helping people clean their life up, clean up their debt–really helping people,â€ he says. “There was a purpose which went hand in hand with what I did. I help the world by giving them something to help deal with their struggles. If it can’t change their life it will at least help them get through it. That’s what I do with my music, and so it was the same with being a mortgage broker.â€

“There’s been some negative press about the real estate game but I never compromised my integrity and I never was a money motivated person,â€ he continues. “I’m more of a success-motivated person. There’s a difference between the two. When you’re money-motivated you compromise yourself, and your life. People make really bad decisions when they’re driven by money. Success is about winning and you win with a team. You win when everyone is seeing the fruits of your labor.â€

Garrett’s labor came in the form of working as a broker from 7am to 4:30pm, then wearily spending his nights working on music until 4am; only to turn around and start the process all over again. “There wasn’t a lot of sleep going on,â€ he laughs. “There was a lot of hard work, and I still work hard like that. People expect 150% results with 70% effort. That’s not how it works.â€

It was this type of determined and unrelenting work ethic that allowed Garrett to return fulltime to music after his two-year stint in the brokering business and go on to become one of the most popular songwriters of today, proving that sometimes you have to take a small step back in order to make a huge leap forward. “Life is about being a student,â€ he declares. “Even in success you can’t get ahead of yourself. I never compromised my integrity over money. Money is just an opportunity to have freedom and choices. I wanted the freedom to do what I want to do. Because of my hard work I now have the freedom to make music and I love that.â€