Single Mom of 3 Graduates From UCLA With 3 Degrees 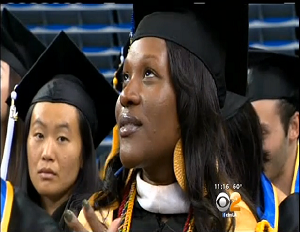 Compton native Deanna Jordan is a living example of beating the odds and accomplishing the goals that people said you never would.

The 28-year-old single mom of three boys walked across UCLA’s graduation stage this past Friday to collect not one, but three degrees from the university that included two bachelor’s degrees and a master’s in African American Studies.

“I needed for my sons to see there was a legacy that preceded them with college. I am the first in my family to go to college,â€ Jordan tells CBS Los Angeles.

Jordan, who had her first child after graduating high school at 18, and her third child at 22, spent two years studying at West Los Angeles Community College and three-and-a-half years at UCLA.

“You can’t really succeed unless you fail, and I failed a lot of times, but it was my persistence and my willingness never to give up,â€ she says.

In addition to being the founder of the Compton Pipeline Taskforce, where she and other UCLA volunteers work on improving the academics at Compton schools, Jordan also worksÂ  in the city’s mayor office. The scholar plans to return to school to earn her law degree and become a district attorney.