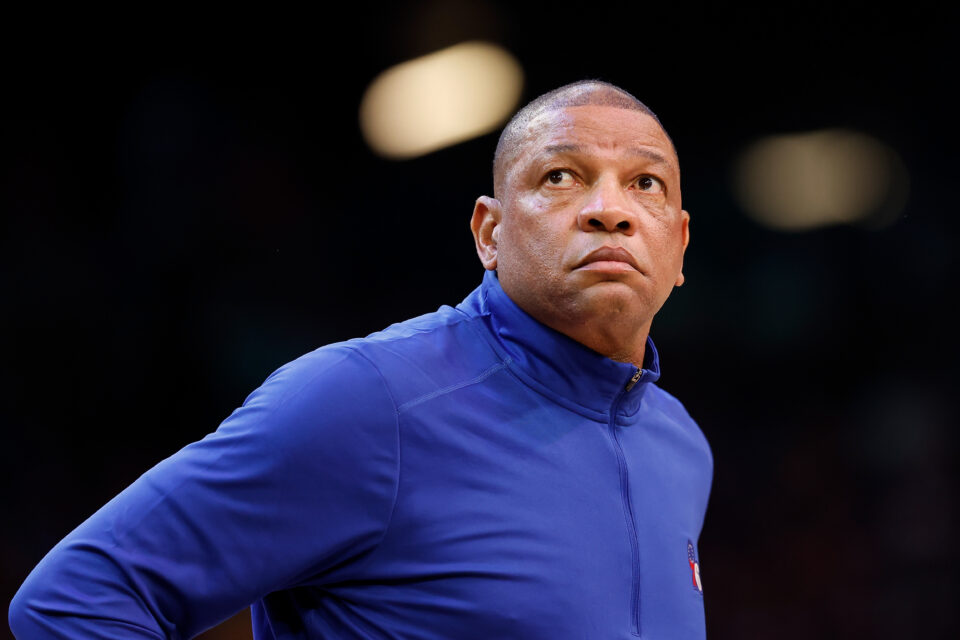 PHOENIX, ARIZONA - MARCH 27: Head coach Doc Rivers of the Philadelphia 76ers during the second half of the NBA game at Footprint Center on March 27, 2022 in Phoenix, Arizona. The Suns defeated the 76ers 114-104. NOTE TO USER: User expressly acknowledges and agrees that, by downloading and or using this photograph, User is consenting to the terms and conditions of the Getty Images License Agreement. (Photo by Christian Petersen/Getty Images)

Coaches set examples for their players, and this NBA coach is encouraging his players to brush up on their American history.

Philadelphia 76ers coach Doc Rivers is using his platform to fight against racial injustice. In an effort to advocate for social change, the NBA coach took his players on a road trip to Charleston, South Carolina, during training camp not only to practice and run plays, but to educate the athletes on American history.

“Teaching American history is under assault right now. And it’s not Black history or teaching about slavery, it’s American history,” Rivers said. “And so I was amazed. The first thing that I was taught the other day was, how many players, and not only players, coaches, came up to me and said, ‘Wow, I never was taught that in my history class.’”

Although the team normally hosts training camp in New Jersey, Rivers schedule for the Sixers to practice at The Citadel, according to the NBA. The professional athletes had the chance to experience the college’s campus full of tanks, jets, and plaques dedicated to prisoners of war.

In addition to team practices, Rivers and the Sixers reportedly organized educational field trips to the Old Slave Mart Museum, where many of the staff are known to be ancestors of the enslaved people of Charleston. The field trips also included a visit to the Avery Institute of Afro-American History and Culture. The team also had the honor of hearing insightful words from Citadel President Gen. Glenn Walters and Bernard Powers, a retired professor and historian.

This week transcended basketball. Dr. Bernard Powers led the team through Charleston’s landmarks, including The Old Slave Mart Museum, the soon-to-open International African American Museum (@iaamuseum), & the Avery Research Center. Many thanks to all our hosts and educators. pic.twitter.com/0vmYxxxSsp

“My people, my African people coming here, the people that gave up their lives for us to be able to be in this position, it was good to learn about all of that,” said center Joel Embiid, Cameroon-native who recently became a U.S. citizen.

According to NBA, after the team finished up practice at The Citadel, Rivers addressed the shooting of the 14-year-old near a northwest Philadelphia high school athletic field before answering questions for reporters.

The NBA Social Justice Coalition board member informed that this generation of NBA players are reportedly more politically aware and involved in societal change than when he played in the 1980s and ’90s. However, he hopes that the players with a larger social media reach would speak on current events. The NBA says there will be no scheduled games this season on Nov. 8, which is Election Day.