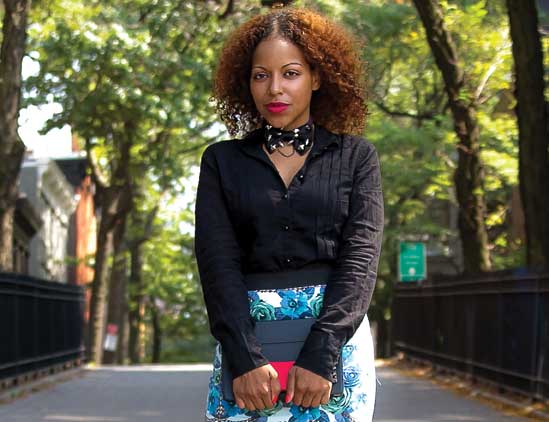 Lisa Marie “Phoenix” Jackson draws daily on the inspiration of her mother, who passed away in 2007, and the advice she received to follow her dreams at any cost.

After holding jobs in sales, customer service, and accounting at companies such as Sprint, Jackson decided to give up the stability of a steady paycheck in 2011 to become an entrepreneur at the ripe young age of 26.

“I had created so much for other corporations, I thought why not do it for myself?” says Jackson, now 27.

The Brooklyn, New York, native had developed a knack for building online relationships and helping her employers connect with customers using sites such as Facebook, Twitter, and LinkedIn. So she created a business plan to launch her social media consulting firm, Phoenix Aficionado.

Jackson used personal savings of $2,500 to cover startup costs for Web design, photography, marketing software, an iPhone, a tablet, and a professional camera. She also bartered with local entrepreneurs.

“I met with graphic designers that were like, ‘If you help me set up my Facebook and Twitter page, I’ll help you with illustrations,’â€ she recalls.

Jackson started out with two clients found through word-of-mouth. “I humbled myself to work for them at no cost on a term basis so that I could develop my portfolio,â€ she says.

When Jackson enrolled in the Black Enterprise Small Business University (SBU) powered by Dell Inc., she was looking for practical strategies she could put into play immediately.

“Sometimes people are intimidated by the word ‘university’ because they think there’s going to be a massive time commitment,” Jackson says.

But the couple of hours a day that she spent watching the videos and applying the advice were well worth the effort. And she was chosen out of nearly 10,000 SBU registrants as the grand prize winner of a package that includes a $10,000 Dell office setup.

Launched in January 2012, Phoenix Aficionado has six ongoing clients at the time of this writing, and Jackson’s business is in the black–averaging $3,000 to $4,000 in monthly income. She’s in the process of hiring a part-time assistant to help her manage her blog and assist with social media. “Small Business University gave me confidence in growing my business that I didn’t have before,” she says.