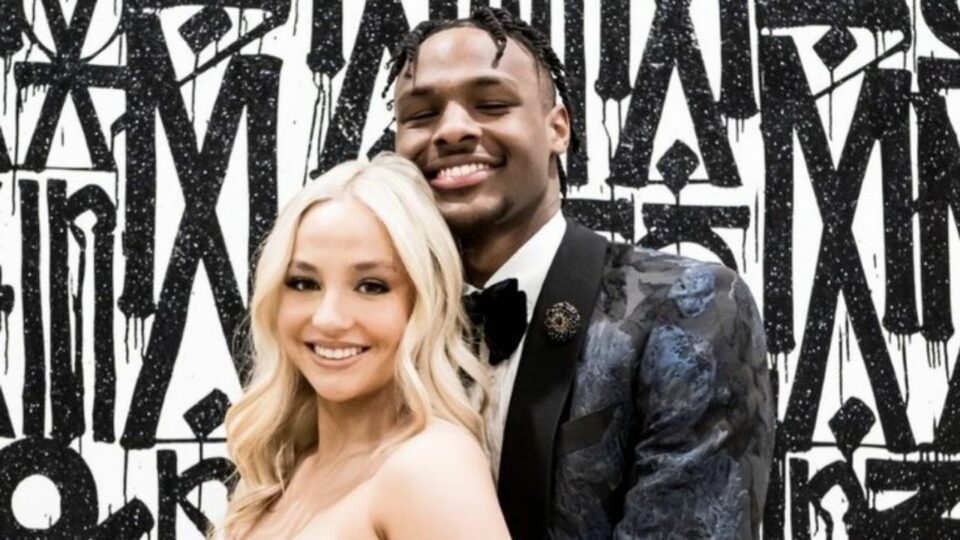 For some time, Bronny James Jr‘s choices in women have sparked frenzied debates across social media. But now Twitter users are either expressing disgrace or respect after pictures were revealed of him and his white high school prom date.

LeBron Raymone ‘Bronny’ James Jr., the eldest son of the basketball legend LeBron James,  attended his high school prom this past weekend at Sierra Canyon school in Los Angeles with classmate Peyton Gelfuso, the Daily Mail reported. After posting pictures on Instagram, critics came trolling with their vile concerns about James going to prom with a white woman.

“Look like daddy but couldn’t find someone that looks like mommy I see,” one person wrote via Instagram. “How you grow up in a household of black love and date a white girl?” another sounded off, while a third cryptically commented, “He startin off young.”

While the appalling Twitter commentary continued, others jumped in to defend James and his date, saying people should just let them be and enjoy the school dance.

Former NFL quarterback-turned ESPN personality, Robert Griffin III was one of those to take a stand for the rising basketball star, according to The New York Post.

“He could take an avatar to prom for all I care,” Griffin said in a video monologue. “Who he choses, is who he choses. And secondly, it’s giving weird energy that a bunch of grown men and women, 40-year-old men and women, are trying to tell a 17-year-old who they think he should bring to prom.

LEAVE THESE KIDS ALONE!
People clowning Bronny for his prom date are just miserable. Let them enjoy their day. pic.twitter.com/ji3CG1dW0E

Grown ass men and women being pressed about who Bronny James, a 17 year old, goes to his high school prom with is by far the strangest behavior that I’ve seen from people on here.
pic.twitter.com/zdazijTmm9

Some folks (black folks), will swear they’re not racist and post the most racist shit about Bronny and his prom date. Make it make sense 😂. Racism also has no color. It’s a mind set. If color triggers you, you are racist. Prove me wrong🤷🏾‍♂️✌🏿

On another note, James’ mother, Savannah, posted a heartfelt message alongside a series of photos of her son and his date.

“Sooooo @bronny went to prom this past weekend….. Tons of emotions and realizations,” the proud mother wrote. “Time really flies. 🥲 So proud of you young man!! I will always have your front and your back!!”