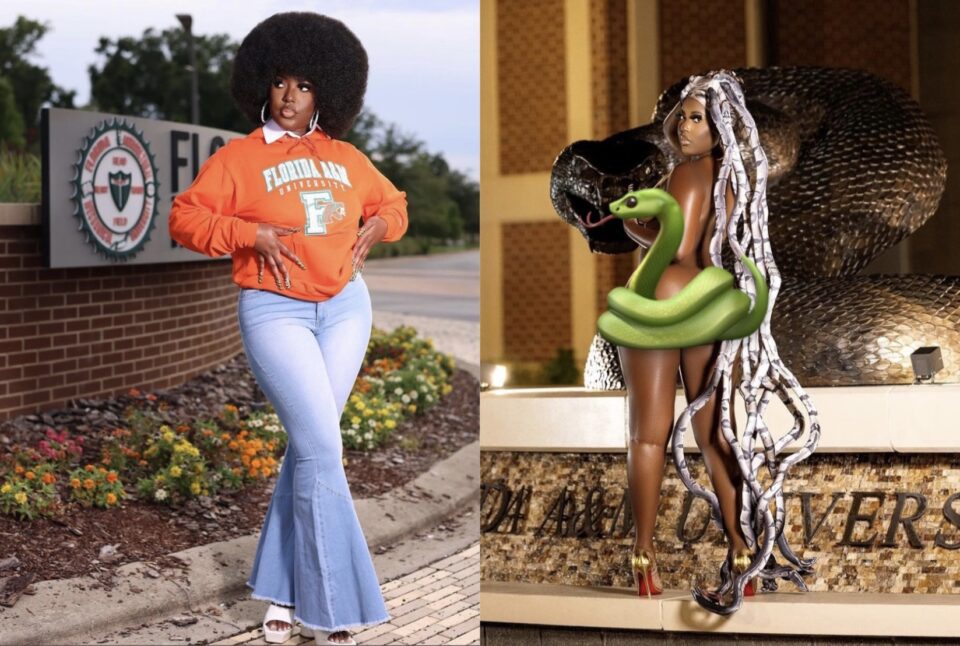 A Florida A&M University graduate recently celebrated her master’s degree achievement with a graduation picture that went viral, as FAMU grad pics tend to do.

A counselor education alumni had social media in shambles after she posted her very nude grad pictures, in front of the HBCU’s Rattler mascot statue, wearing nothing but gold red bottom heels and a head full of body-long snakes.

“Anybody who knows me knows that I’ve been dressing provocative my whole life,” Terica Williams explained in the post.

Despite the nude photo shoot at her alma mater, Williams attempted to cut through the bare-all picture with a message about acceptance and mainstream standards of appearance.

“There’s a lot of assumptions that have came with me accepting my body,” she wrote on Instagram. “A lot of people questioned my capabilities and intelligence solely based on how I choose to dress. As I’m standing here with my Masters Degree at the tender age of 24, I am the living proof that clothes do not define you. I encouraged every body to embrace their bodies and step outside social norms.”

Many came to critize the new grad, suggesting the idea was distasteful and that she set back the HBCU by centuries, while others defended her honor and creativity.

Incidentally, the picture landed on the school’s radar and FAMU released a statement regarding the viral image.

“Vice Presdient of Student Affaris William Hudson, Jr., Ph.D., said, ‘The university is aware of the picture taken and is currently investigaign the incident,’” read the press release.

In a different grad post, where Williams is fully clothed, she revealed her accomplished academic career while at the HBCU, donning an orange FAMU sweatshirt, bell bottom jeans, and a lucious afro.

In the caption, the master’s grad flaunts her winning of thousands of dollars worth of scholarships, steady 3.8 GPA, earning a graduate assistant, awarded a graduate fellowship, her rise to mentorship, her bonds through the Big Sister Little Sister Mentoring Program, and how she “perfected [her] image.”

“Now, I am joining the 2% of black therapists. For that, I am forever grateful. Warmly, Terica Williams, M.Ed ( Masters in Counselor Education),” she ends the post.

Here are a few of the many reactions social media took with the daring shoot: