Social Media in Shambles Over Zaya Wade Kissing Her Boyfriend 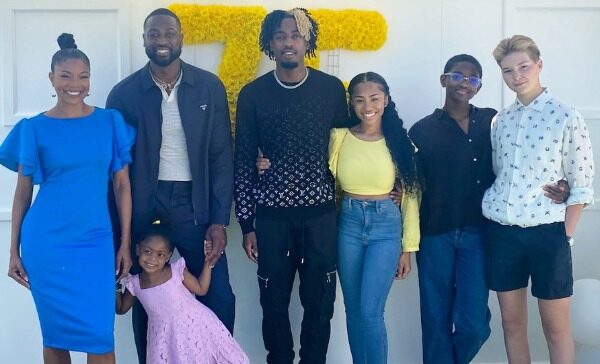 The Wades shared highlights from their Easter celebration through a series of photos posted by Zaya and Gabrielle Union, Zaya’s stepmom. The two are close. Union helped Dwyane come to terms with Zaya, who was born a male, wanting to transition to living as a female.

But social media is debating over the intimate photos Zaya posted with her boyfriend, who attended the Wade’s Easter festivities.

Union was the first to share a family photo showing her and Dwyane smiling proudly next to their three kids and two plus-ones.

Dwyane’s eldest son Zaire, 20, was seen cuddling alongside his girlfriend while Zaya, 14, did the same with her boyfriend. Little Kaavia James held onto Daddy Dwyane while beaming from ear to ear.

Zaya followed up Gabrielle’s post with her own praising how she spent her Easter surrounded by love.

“I’ve had the best weekend, spending quality time with my family and s/o for Easter,” Zaya captioned the post. “I hope everyone has had a wonderful Easter today and a wonderful Passover this week!! I love you guys.”

The Wades are well aware of all the public scrutiny surrounding Zaya’s sexuality. There continues to be great debate around Dwyane allowing his daughter to transition so young. Zaya posting affectionate photos with her partner further ignited the public to pass judgment.

Andrew Caldwell, a.k.a. “Mr. Delivert,” was the first on Instagram to pass judgment on the Wades’ parenting style.

“I don’t care about preferences,” Caldwell wrote. “But I do know if your daughter was 14 you wouldn’t be pleased with her taking pictures of herself kissing her boyfriend at 14.”

But there were many quick to criticize Caldwell and anyone else who took time out of their day to judge how someone else raises their kids.

“Honestly, we should let parents parent their children and move on with our lives,” one user wrote. “There’s so many ways we don’t even respect our own selves, our own bodies and our own families so I can’t match the respect part.

“Zaya lives in a world where her parents respect her actual thoughts and feelings more than their needing to over authorize, and she’s actually happy. Not sure many can say that about their own lives and their own children.”

Over on Twitter, onlookers debated what the issue was with Zaya dating another member of the trans community.

“I gotta be honest, I have never been this confused in my life,” one Twitter user wrote while reposting a few of the family’s photos.

“I am all for living your truth but this is a little wild.”

I gotta be honest, I have never been this confused in my life. I am all for living your truth but this is a little wild.

But there were many who called out the critic telling them to mind the business that pays them.

“Ok…a teenage girl dating a teenage boy. What exactly is the issue? They’re both straight, isn’t that what y’all prefer?” one user wrote.

“What’s your point? Why are you bothered by something that has absolutely nothing to do with your life?” another user asked. “I’m sure your time would be better spent on self-reflection. Maybe you can figure out why you feel the need to criticize others’ choices.”

“You don’t think it’s weird that you have pictures of kids kissing in your phone?” added someone else.