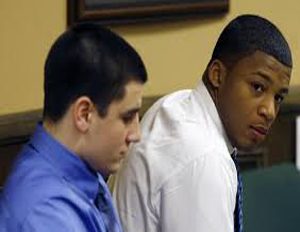 In a case that played out not only in the court room, but from smartphone to smartphone and across social media in one Ohio town, and across the nation, news hit on Sunday that the two high-school football players from Steubenville, Ohio were found guilty of raping an intoxicated, 16-year-old West Virginia girl. Judge Thomas Lipps delivered a guilty verdict on all charges.

Trent Mays, 17, and Ma’lik Richmond, 16, both football players at Steubenville High School, received delinquent verdicts, which, for juveniles, is the equivalent of guilty. Â Mays, who was also found delinquent on a charge ofÂ illegal use of a minor in nudity-oriented material, was sentenced to a minimum of two years and a “consecutive” sentence that may last until he turns 24, according to The Atlantic Wire. Richmond was sentenced to a minimum of one year in a juvenile rehabilitation facility and a maximum of until he turns 21 on a juvenile charge of rape. Mays and Richmond will also have to register as sex offenders for the rest of their lives.

The rape survivor, who has not been identified, testified in court on Saturday about the August 2012 attack. She confirmed that she did not remember the attack, but that she remembered waking up naked in an unfamiliar house after drinking at a party. The girl also reported she recalled drinking, leaving the party holding hands with Mays and throwing up later. When she woke up, she said she discovered her phone, earrings, shoes, and underwear were missing, she testified.

“It was really scary,” she said. “I honestly did not know what to think because I could not remember anything.”

Now, this is where social media, text messaging and the Internet began to fill in the details, resulting in critical evidence that led to a conviction. While it’s difficult to build a case on a sexual-assault survivor’s limited memories, viral photos and videos coupled with text messages can put the pieces of the puzzle together and provide a strong record of what took place at a crime scene.

The teen said she believed she was assaulted when she later read her friend’s text messages and discovered a photo of herself taken the night of the attack; in addition, a 12-minute video from the night of the assault shows a former classmate of the young men mocking the victim. A classmate of the attackers testified that he, too, took a cell phone video of part of the actual assault but later deleted it.

The prosecution presented many of the text messages, including one in which the survivor wrote, “I wasn’t being a slut. They were taking advantage of me.â€ She also said she saw a little over a minute of the video, but couldn’t stomach watching the entire thing.

The Internet played a large role in this unfortunate crime. And the power of social surpassed the conviction, causing numerous people, from seasoned journalists to everyday people, to weigh in after the verdict was in.

Glad for guilty verdict in #Stuebenville but this case shows how far we have to go.

Accept rape is wrong first and foremost, know it comes in many forms, look at facts, then work from there.

How is it that we have as a society have accepted the notion that you can be a good guy who happens to have raped someone? #Steubenville – Emily L. Hauser (@emilylhauser) March 18, 2013

Given the mixed reactions to #Steubenvilleon Twitter, it’s a good thing it wasn’t a jury trial. Some damn adults don’t know what rape is. – dream hampton (@dreamhampton) March 17, 2013

We need to make this a culture where “I didn’t know it was rape” is not a realistic thing for ANYONE to say. #Steubenville – Kate Harding (@KateHarding) March 17, 2013

Grateful for the guilty verdict in #Steubenville. Lack of consent = rape. Always has, always will. Sad we have to reiterate that over & over

How do you think social media will affect the justice system? Let us know what you think in the comments section below.