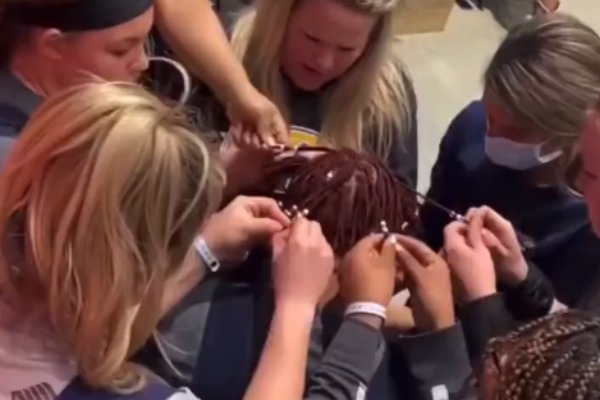 A video making its rounds on social media has sparked questions amid the passing of the CROWN Act that protects people of color from discrimination against natural hairstyles.

“A #Black girl in a powerlifting competition was told by one of the judges she could not continue to compete with beads in her hair,” Nasheed captioned the post. “So other girls in the competition helped her remove her #beads so she wouldn’t be disqualified.”

“Wasn’t that “Crown Act” law that was just passed supposed to prevent this?” he asked.

Many took to his comments to share their thoughts on the viral clip.

“I Know you already know by now but it was only passed in some states and it won’t make it to Biden’s desk to sign which we know he will—until the raggedy azz senate passes it,” Fox Soul host Claudia Jordan wrote.

“How’d she make it ALLLLLL the way to the competition without somebody making an issue of it to that point?” asked someone else.

Civil rights attorney Benjamin Crump shared the video on Twitter, calling out how “awful” and “embarrassing” the incident must have been for the young athlete.

“We must continue the fight to BAN biased hair discrimination everywhere!” Crump wrote.

A judge forced a Black powerlifter to remove her hair beads if she wanted to finish competing in an event. This was awful to witness and must have been humiliating for the young girl. We must continue the fight to BAN biased hair discrimination everywhere!
🎥:IG/tariqelite pic.twitter.com/CFs7MxiA0Z

After one Twitter user attempted to defend the judge’s ruling saying the beads could be deemed “jewelry,” which typically isn’t allowed when competing, another user shot back in defense of the Black athlete.

“I’m equally sure this was misogynistic racism,” the user wrote. “Hair beads are not “jewellery.” Necklaces etc., are removed in school sports because of the risk of entanglement—how can hair beads pose a risk in powerlifting?”