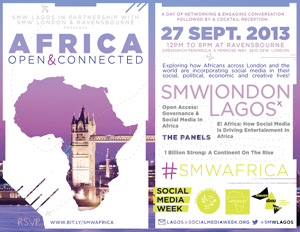 Social Media Week (SMW) has a global reach, bridging both geographic and social borders through engagement and virtual networking. Last February, SMW came to Africa with the historic launch of SMW Lagos, which hosted 100 events over the course of five days.

SMW Lagos, produced by Dragon Africa and AFRIKA21, is back and heading to London, England on September 27. After the success of the inaugural SMW Lagos, the team has been invited to participate in Social Media Week London to host a day of programming, entitled “Africa: Open & Connected.â€

In partnership with SMW London and Ravensbourne, the daylong event will delve into the ways Africans are incorporating social media in their unique social, political and economic landscapes. The featured panels include “1 Billion Strong … A Continent on The Rise,â€ “Open Access: Governance & Social Media in Africa,â€ and “E!Africa… How Social Media Is Driving Entertainment in Africa.â€ The programming will conclude in a special concert: SMW Lagos LIVE!, presented by Nigeria’s premiere radio station Beat 99.9FM which will be streamed live.

Obi Asika, chairman of SMW Lagos and founder of Dragon Africa, is excited about representing Africa in London. Over half a million Africans from across the continent call London their home, says Asika, who adds that social media has made the geographic difference smaller and this cross-city collaboration worthwhile for both parties.

“Our team was interested in how other large cities manage Social Media Week,â€ says Asika to BlackEnterprise.com.Â “London has produced an exceptional event week for the last few yearsÂ and we thought it important to connect with some other cityÂ organizers.Â BecauseÂ Social Media Week is about exploring how people areÂ using social media in their everyday lives weÂ thought it would be interesting to look at how Lagosians throughout the Diaspora are using these tools to keep connected.â€

Ngozi Odita, founder of AFRIKA21 and executive director of SMW Lagos, points out that technology hubs are popping up across the continent of Africa, making this conversation a must-have during any conversations surrounding technology, namely the mobile market, and Africa. “TheÂ sheer amount of current engagement, coupled with Africa’s uniqueÂ creativity in solving it’s own problems makes it a continent ripe for tech innovation, investment and collaboration.”

After much success with SMW Lagos, the team is expecting the same turnout during their London collaboration. They’re a few months into planning the next iteration of the weeklong event and its no surprise we shouldÂ expect big things from the socially-savvy duo for SMW 2014.