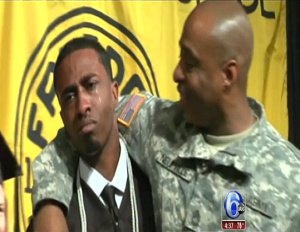 Graduation is no doubt one of the happiest days in an individual’s life, and it’s a day that most spend with dear family and friends. However, far too often we hear of military kids who have to celebrate this joyous occasion in the absence of one parent, if not both parents, due their devotion to serve our country.

But every now and then we get an emotional story of a parent who is able to make the necessary sacrifice and give their child the greatest graduation gift of all time –their presence. That’s exactly what happened on June 4 for student Dashaun who was graduating from Freedom High School in Bethlehem, PA.

As everyone’s parents cheered for them in the stands at graduation, Dashaun’s dad waited in a back room at the ceremony before coming out and surprising his son on stage. U.S. Army Sgt. Owen Neuville, Dashaun’s dad, was deployed to Afghanistan a few months ago, and it was not brought to his son’s knowledge that he would be able to attend his graduation.

“I’m not going to cry. Once they start walking up, the magic will happen,” Sgt. Neuville told ABC7 Chicago just moments before greeting his son.

As Dashaun walked on stage to collect his diploma, his dad came from backstage and from there the water works occurred as the teen hunched over with tears while his father hugged him.

Dashaun will attend Kutztown University in the fall where he plans to study medicine.