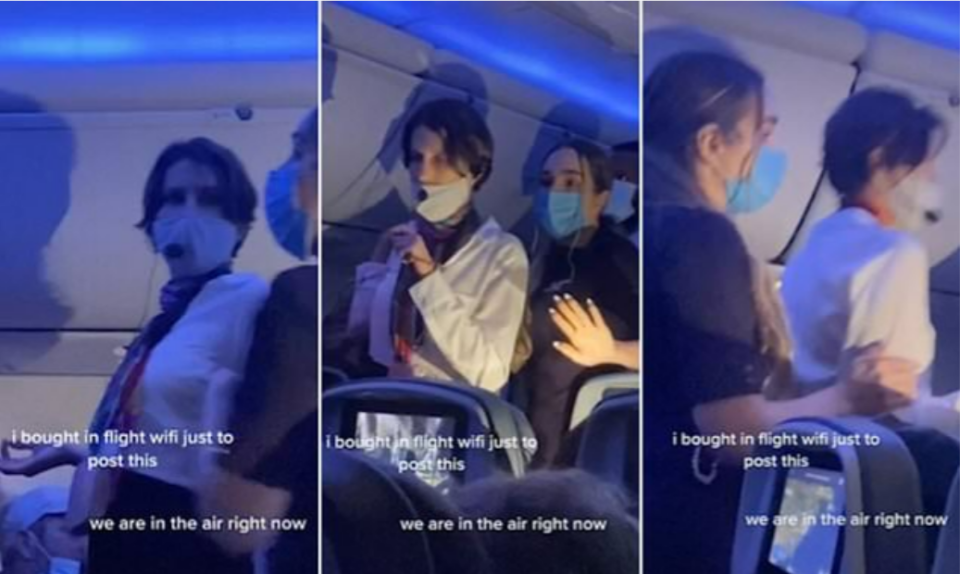 The internet has christened a woman “Airplane Karen” after she recently brought a microphone onto a plane for the sole purpose of delivering her own theories about the origins of COVID-19 to a plane full of passengers.

The incident was captured on camera by up-and-coming singer Jawny who shared it via TikTok, writing that he paid for in-flight WiFi to post the video as quickly as possible.

The woman attempts to deliver her message during the short clip as flight attendants repeatedly ask her to take her seat. She is heard interrupting herself several times to address the crew, stating that she’s “harmless” and that the other passengers are enjoying her speech because she’s “not terrible to look at.”

Despite the interruptions, she does manage to present the theory that “the pandemic started because everyone lost a little bit of faith,” later suggesting that people’s electronic devices were to blame.

According to the FAA, the agency has received 4.837 reports of unruly passengers to date this year alone. Of those reports, 906 were investigated due to direct violations of one or more FAA regulations or federal laws. Less than a third of those investigations have led to the involvement of law enforcement.

By contrast, the 206 enforcement cases initiated this year far exceed the number of overall cases investigated by the FAA in 2020: 186.

As a result of the increase in on-flight misconduct, the FAA even created a digital toolkit, offering airlines and their employees a bevy of resources to help them manage unruly passengers.

Although Jawny did not indicate which airline he was aboard when he filmed the incident or where the flight was headed, his Instagram posts this week indicate that he had been in Texas before making this now-viral post. A photo posted the following day also appears to have been taken in the U.S.