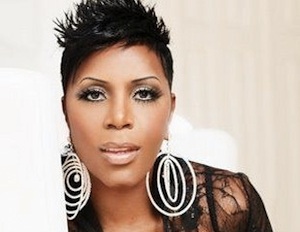 She’s raunchy. She’s sexy. And to say she keeps it real doesn’t really capture her essence. But the comic Sommore is anything but consumed by her own celebrity.

For instance, there’s a bit she did not too long ago in which she discusses one of the many nuances of her relationship with her fans. It starts simply enough, as if she’d simply gotten up in the hair salon and started telling stories.

“I’m not an actress and I have to especially say that to black people because y’all are hard,â€ she says, already getting laughs. “Two, three movies go by and y’all don’t see me in the movie [but] see me in Target y’all think I work there. Y’all even call me by name, ‘Yo, Sommore, y’all got this in brown?’

“I can be just walking and people on the phone see me and say, ‘Oh, my God, Ma, I’m standing here with Sommore. You gotta talk to my mother,” Sommore said recently by phone from her home in Florida. “They just hand me the phone.”

“But the beautiful thing about it is that my comedy has reached a new generation. People come up to me and say, ‘My goodness, my mother loved you so much.’ And I’m standing there looking at them, like, thank you but you look like you’re my age. I get that and I love that. So I tell people that the gift of laughter doesn’t have a specific generation. In that way it’s like music.”

You could take that as a comical humble-bragging. But the truth is that Sommore is among the most beloved comics of the last 15 years, a touring force who, despite a lack of mainstream success on film and in Hollywood, has emerged as an enduring force in theatre’s and clubs throughout the country.

In September, she shot her latest DVD hour special, “Chandelier Status.” On Martin Luther King Jr. weekend, Sommore will headline New York’s Caroline’s Comedy Club, an annual event that has served as a kind of homecoming for the Trenton, N.J. native. Those developments in her career come as she is looking to make waves in business with the “Chandelier Status Card,” which provides discounts and special promotions on FDA-approved brand and generic drugs at participating stores around the country.

The Chandelier Status Card is far from Sommore’s first crack at entrepreneurship in business. She once owned a shoe store, a clothing store and an ethnic grocery store that imported rare food from Africa. All were passions of hers — she holds a B.A. in Business Administration from Atlanta’s Morris Brown College.

“That wasn’t my ultimate, though. You get to that point in your life where you’re like, ‘Is this it?‘ And in my wildest dreams I had to think about what I would have done. I would have become a stand up comedian. I dropped everything. Got a book called “How to Become a Stand-up Comedian.” Read the entire book from beginning to end.”

The rest is well-known among Sommore’s most loyal fans. After setting out to fill the void of adult female stand-ups, Sommore landed coveted hosting gigs on BET’s Comicview, HBO’s Russell Simmons Def Comedy Jam, BET’s Live From LA, and Showtime At The Apollo. In 2001, she starred in the Walter Latham-produced Queens of Comedy alongside Laura Hayes, Adele Givens and Mo’Nique. In 2008, she executive produced her special, The Queen Stands Alone.

“As I grew in my business, I knew what I wanted to do and I wanted to be more hands-on with it,” she says of her 2008 special. “It was a learning process. I learned a lot which helped me make decisions with Chandelier Status, which I’m proud to say was a bigger production. I was able to get the ideas to own my own production company because one of the things I don’t want is to be a one-dimensional comedian that doesn’t know the entire business. Financially, I made my money back immediately, so it was all good.”

Sommore says becoming familiar with the business aspects was borne out of a necessity to be an individual and savvy businesswoman.

“I learned early on that for whatever reason, Hollywood just wasn’t really messing with me like that,” she says. “They pick and choose whoever they’re going to deal with and I decided that I wasn’t going to sit by and wait for them to do a project with me. If I did, I wouldn’t have a project out since the Queens of Comedy. I’d be frustrated, angry and bitter right now. So that’s why I encourage people to step out on faith and invest in yourself.”

“Is it risky, and does it give me gray hair? Of course. But I buy hair dye, and I keep it moving,” she says with her trademark giggle. “What’s your other choice?”