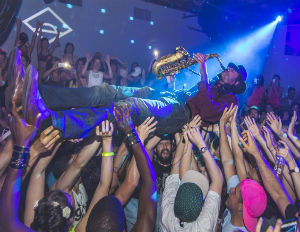 Behavioral finance experts will tell you that one of the biggest influences on our financial behavior as adults is the way we saw money handled when we were growing up.

For jazz sensation Marcus Miller, whose debut EP Love in Absentia came out in December 2015, his father’s early emphasis on saving helped him create the financial security he needs in order to be a working musician.

“My pops is awesome, and ingrained the importance of saving into me at an early age,â€ says Miller. “He told me whenever you get money, Â put some of it away so that you completely can’t touch it. You don’t use it for expenses, nothing.Â  That’s been really important for me.â€

Miller, whose jazz and soulful sax playing have landed him on The Late Show with Stephen Colbert with Jon Batiste and Stay Human, onstage with the likes of Herbie Hancock and Calvin Harris, at venues including Carnegie Hall and New York’s Blue Note jazz club, and recording with artists including Sly Stone and George Clinton, also spent time in the financial world.

After earning his bachelor’s from Harvard in Mathematics in 2008, the self-described “math and physics nerd,â€ worked at a hedge fund in Westport, Connecticut, for five months called Bridgewater Associates.

“I did attribution analysis. Â I looked at the actual results in the market and I attributed where the differences were. Where did the model fail? Where did something weird happen in the market? How can we improve the model? I would put a narrative around that,â€ says Miller.

Knowing that he didn’t want an all too familiar ‘narrative’ around musicians being broke to be his story, but wanting to work on his music full time, Miller put his passion for math and physics to work by tutoring high school and college students, allowing him to preserve the money he saved from his hedge fund days. “I love it and it makes me proud. One of my students graduated from Harvard and is going to Cambridge University,â€ says Miller.

As for the most important money lessons in addition to saving, Miller says invest in relationships, and invest in yourself. “The richer you are as a person and the more competent you are as a person, there will be opportunities to create real value. Real value makes money stay in your life.â€