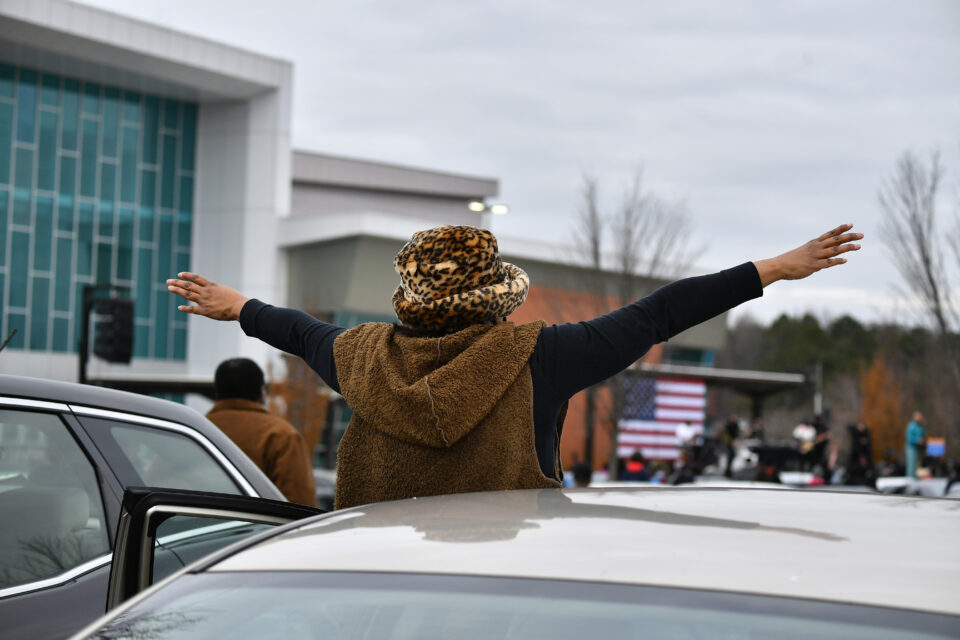 AUSTELL, GEORGIA - DECEMBER 20: A supporter cheers from her car during Souls To The Polls Drive-In Rally for Raphael Warnock at Riverside EpiCenter on December 20, 2020 in Austell, Georgia. (Photo by Paras Griffin/Getty Images)

Black religious leaders in Georgia held their annual Souls to the Polls rallies Sunday afternoon to get their congregants to vote in the midterm elections.

State lawmakers almost eliminated the event under an elections restrictions bill signed into law last year by Georgia Gov. Brian Kemp. However, lawmakers backed off the elimination of Sunday voting.

The Souls to the Polls event included a caravan organized by local church leaders and civil rights organizations, including the NAACP, taking congregants from the Rainbow Park Baptist Church to an Atlanta-area mall where early voting is available.

W. Franklyn Richardson, the chairman of the board of trustees of the Conference of National Black Churches, told theGrio, “Souls to the Polls reflects the Black church’s central role in the fight for justice and freedom in the U.S.”

“It’s the cumulative accomplishment of our people that is being challenged and threatened that makes this such an urgent election,” Richardson added.

The joy of the Lord is our strength. Thank you for inviting me to worship with you today as we get souls to the polls, @dReamcenteratl! pic.twitter.com/iGzIf33Uas

Sen. Raphael Warnock, a senior pastor at the Ebenezer Baptist Church running for re-election, also planned to hold a Souls to the Polls event to get church members to vote ahead of the last Sunday of early voting.

While the elections restrictions bill Kemp signed did not eliminate Sunday and early voting, the bill has cut the time to request a mail ballot, rolled back the use of drop boxes that were expanded during the COVID-19 pandemic, reduced early voting during runoff elections, and made it illegal to hand out food and water to voters waiting in line.

Republicans in the state, including Kemp, pushed hard for the bill after President Joe Biden won the state in the 2020 election, which carried him to the White House. Georgia Rep. Park Cannon (D) was arrested after knocking on Kemp’s office door to discuss the bill with him.

The event reflects the Black church’s role in getting Black men and women to vote and underscores the efforts Black Americans had to go through during the civil rights movement to vote safely. In 1955, Rev. George Lee was assassinated by white supremacists in Mississippi after assisting more than 100 Black residents in registering to vote.