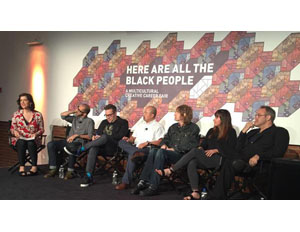 (Image: The One Club)

A funny thing happened at the 2015 Advertising Week panel called Here Are All the Black People. There were no black people on the panel.

Advertising Week is currently under way in New York and features panels, events, career mentoring, and other activities focused on the ad industry. An event hosted by the organization The One Club got a lot of attention when the image of a panel of seven speakers, sitting under a banner proclaiming the name of the event—Here Are All the Black People—had not one black person on the panel.

A picture of the panel, which was discussing how to attract young people to the ad industry, quickly made the social media rounds with its stark imagery of seven non-black speakers against a backdrop of the banner. Reactions ranged from amusement to offense when advertising agency, Grey New York, tweeted a live stream of the panel’s discussion: 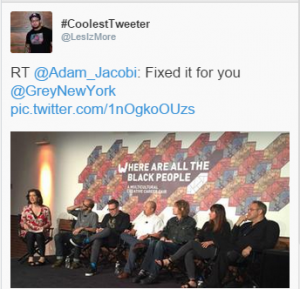 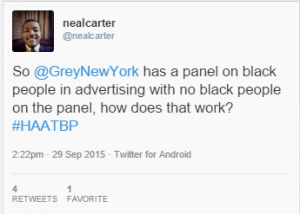 In all fairness, the panel in question was one of many activities at the Here Are All the Black People event. In a comment to Digiday, The One Club responded to the criticisms and defended its event:

There were several African-American panelists preceding and after this particular panel, and there were several mentors and pitch participants throughout the day that were also African-American, as were the majority of attendees. It hasn’t, however, directly responded to any of the criticism, saying it’s “unfortunate” that the image has received so much negative attention, since the panelists on the panel and their agencies are all committed to promoting diversity in the industry.

With heightened awareness about the lack of diversity in industries including tech and adverting, the tone-deafness in the way the panel was put together highlights the diversity issue even further. Although The One Club’s entire event was all about inclusion, advertisers should know better than anyone about the power of optics.