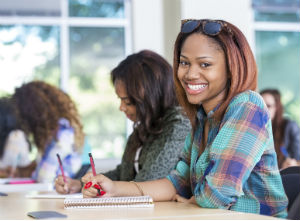 Spelman is the latest prestigious women’s college to consider admitting transgender students. Other institutions, including Barnard College in New York City and the other members of The Seven Sisters Association of historical woman’s institutions in the Northeast have already enacted policies admitting those students, reports the Atlanta Journal Constitution.

Spelman College’s president, Mary Schmidt Campbell, is convening a task force to provide recommendations on whether the all-women’s, historically black college will admit transgender students. The announcement was made in a welcome back letter to the campus community and posted on the private school’s website.

The transgender task force is one of two that Schmidt Campbell is creating to review campus issues. A separate emergency planning committee has been tasked with developing policies and procedures for the campus to follow in emergencies. The task force considering transgender students will be headed by Spelman’s vice president of enrollment management.

At the present moment, it appears that there won’t be any immediate changes made in the school’s current admissions policy, but reports from the task force are anticipated to be completed by the end of the school year.

Should Spelman follow the lead of Barnard College, which updated its policy last June, college admissions will consider those applicants who consistently live and identify as women, regardless of the gender assigned to them at birth. To be considered for admission at Barnard, an applicant must select ‘female’ on the Common Application and her application materials should support this self-identification.

Like Barnard, Smith has adopted a similar policy that also notes that applications from those assigned female at birth and who now identify as male will not be eligible for admission. At least one exception to this thought process is Mount Holyoke whose admissions policy now accepts anyone biologically assigned female at birth even if they identify as male as well as anyone biologically assigned at birth both male and female anatomy (Intersex).

The announcement by Smith is the “latest clash of considerations for colleges nationwide on the scope of LGBTQIA (lesbian, gay, bisexual, transgender, questioning, intersex and asexual) admissions and protection efforts,â€ according to EducationDive.com, a mobile-friendly publication and tool for the education industry.Â “In California, legislators are preparing for intense debate of SB1146, which seeks to create a public listing of colleges which claim exemption from non-discriminatory education policies on the basis of religion, and potentially allow for litigation against the policies,â€ the site states.

Spelman Ranks Among The Best Colleges

In national rankings, Spelman continues to gain ground, according the open letter. Spelman ranked No. 1 among the 10 historically black colleges and universities with the highest four-year graduation rates.