Spendwith is Allowing You To Become An Investor 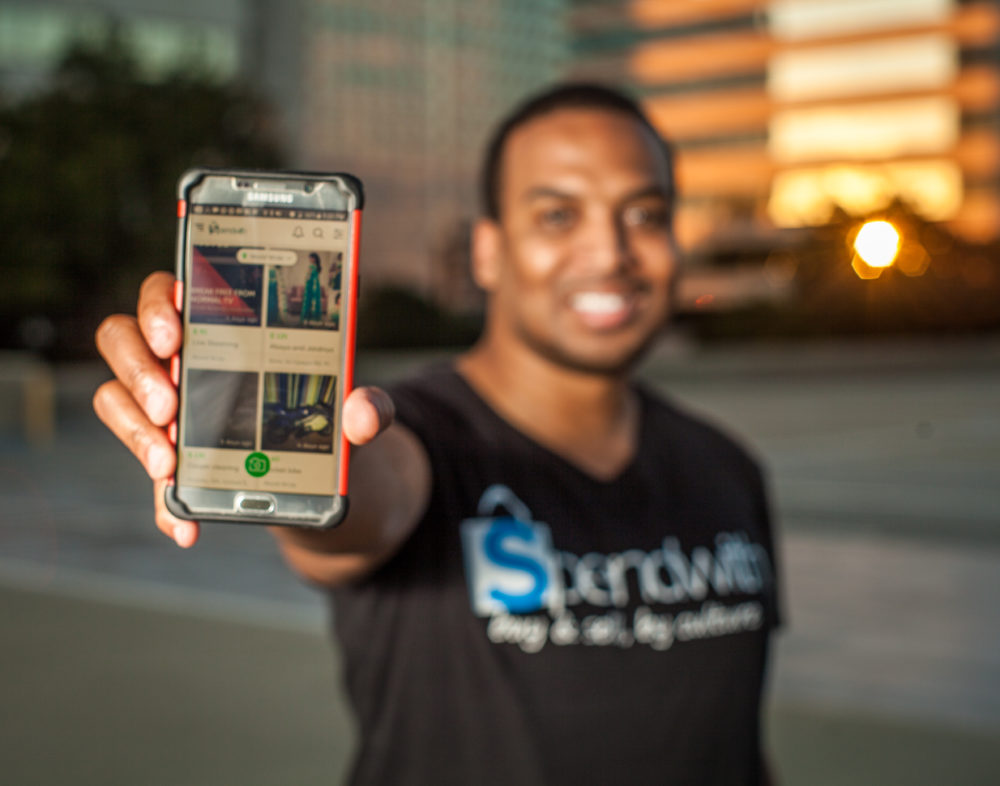 So many new startups seek Venture Capital to finance their companies but, Spendwith, a social impact company focused on increasing commerce within cultures, is taking a different approach.  Not only is the company allowing its users to spend with culturally relevant companies, but it is also allowing you to spend with it by investing in the company itself. That’s what you call a multiprong approach, keeping the dollars in the community.

Black Enterprise caught up with the founder, C. Jibril Sulaiman II to talk about why he started Spendwith, how he compares to the competition and why he decided to use equity crowdfunding to raise his “Friends and Family” round.

I’m a 16-year entrepreneur that previously ran an Inc 5000 ranked tech company for 6 years.  Before that, I owned several “mom & pop” wireless stores for 10 years.  The technology behind my tech company was based on a problem I personally experienced in accepting prepaid wireless payments as a wireless store owner.

Why did you decide to start Spendwith?

I actually started the first iteration of Spendwith in 2015 after serving with a local African American Chamber of commerce.  I wanted a way to curate the commerce of Black Business, after unsuccessfully launching a local black business directory.  So I began working on a “Black Amazon” or a version of a black e-commerce site.  Because the growth of my tech company was occurring at the same time, I wasn’t able to fully commit the time needed to finish Spendwith.  Over the next few years, my perspective began to evolve on the type of platform needed and who the technology needed to also serve. After the decline of my tech company in 2016 and consequently filing for personal bankruptcy, I sought out for a job in web development. However, the lure of entrepreneurship was still strong, and I decided to bring a previous idea back to life, in a new form.  That’s the version of the Spendwith App we have today, one that encourages spending with the seller and businesses associated with 8 different cultural groups, with more to come.

Spendwiths mission is to increase commerce with cultures and across cultures. In short, I wanted to create a platform that gave people a way to feel good about targeting their spending towards multiple cultures. Until now, no platform like this existed.

How does your company compare to other competitors in the market?

There are some mainstream competitors like Facebook Marketplace, Letgo, Offerup and 5miles.  They offer the ability for any user to list a product or service.  But none offer the ability to associate with a culture or demographic.  This factor is important for those who want to target their support of local businesses.  There’s definitely validity in what we are doing.  Facebook alone has over 40,000 cultural groups.  These groups host posting from 16+ million users.  They post things for sale, offer services, and discuss new business ventures. These groups are described in various ways, some are called “networking” others are called, “marketplaces”, “online flea markets”, “buy/sell/trade” groups and more.  On Instagram and Twitter, users hashtag business related posts under “#blackbusiness”, “#womeninbusiness” and more.  Our goal is to organize and display this culture/demographic related activity in our app in addition to the organic listings that will be posted.

I see that you are currently fundraising, how much have you raised so far and what number are you aiming to hit?

Yes, we are raising under the 1-year-old Title III, Regulation CF rules, that formed as a result of the 2012 JOBS Act. These rules allow a private company to raise money from non-wealthy investors by selling shares.  This is important because black founders of businesses get about 1% of the private equity investments that are made.  This means we have to find alternative ways to raise the capital needed to fund our companies. Regulation CF is the future of fundraising for many of the businesses with Black and Brown founders.  In our offering, we are raising a minimum goal of $10,000 and a Maximum goal of $500,000.  One of the catches with Regulation CF offerings and the new SEC rules, is I’m not allowed to discuss most of the details of the offering, only to say that you can view it on our StartEngine.com page.  Start Engine is a company that hosts Regulation CF offerings.  They sent our company through a rigorous due diligence process and vetted the company before we were able to launch the offering.

What are some of the challenges that you are experiencing fundraising?

Raising under Regulation CF is similar to the “friends and family” round that most startups begin with.  This important money that is vital to getting the startup off the ground. However, as a black founder, my ability to raise is only as strong as the net worth of my network.  Statics shows that the average net worth of a Black family is less than $10,000, versus $150,000 for a white family.  This adversely affects startups during the crucial “friends and family” round, it also affects a Regulation CF offering depending on diverse your online network is.

Another challenge is false promises.  I’ve had many people say they would invest, however for unknown reasons they’ve not done so.  I can’t and I don’t let those people subdue my optimism.  For the first time in 80 years, many average working people have the opportunity to buy early shares in a startup.  Some may not understand the gravity the opportunity and that’s why education about   Regulation CF so powerful, is important.  This is not a Kickstarter or GofundMe guys, these are real shares in an early startup!

How are you getting past those challenges?

I get through these challenges with, faith, perseverance, and technology.  I have faith that the story behind our startup and the interest this unique idea will grow.  I also have faith that, through some act of God,  the people who are meant to see our offering will see it, believe in our story, believe in our mission and believe that I and our other founders will create something great.  I’ll say that technology enables my ability to persevere. I’ve leveraged my LinkedIn contacts by sending out email blasts, used Instagram and Twitter for daily postings to old and new followers, and utilized programs like FB Virtual assistant (a software created by another Black founder) to send automated messages to my Facebook friends about the Spendwith offering.  I reach out beyond my network to even wealthy investors using platforms like Angel.co, Gust.com, and F6S.com

Users can post their business, sell, or find businesses/sellers by downloading the app at https://spendwith.in/dl

Because of our type of offering, anyone can be an investor.  Interested investors can see our offering at https://spendwith.in/invest