Splurge of the Week: BMW i8 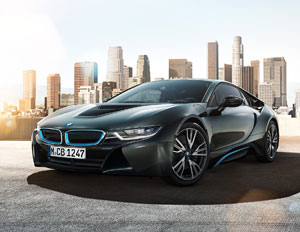 Every year, car companies bombard you with holiday ads, pictures of picturesque families getting new vehicles with big red bows.

But if you really want to do it big on Christmas, you’ll have to think outside the box in terms of cars.

And there’s no car more out of this world than the BMW i8.

The i8 isn’t just a hybrid car-those have existed for quite some time-but a hybrid supercar, a realm with far fewer contenders.

It can hit 0-60 in 4.4 seconds, putting it within striking distance of cars like the Lamborghini Gallardo. Not bad for a car that runs on mostly batteries.

The i8’s power comes from two sources. Unlike all-electric vehicles like the Tesla Model S sedan, the BMW i8 has a three-cylinder gas engine in addition to an electric motor, so you won’t have to worry about finding an electric charging station wherever you decide to travel.

You can charge the i8 like an electric car, or fill it up like a regular one.

There are over 8,800 electric charging stations in the United States according to the U.S. Department of Energy, but they aren’t all equipped to handle every electric car like ever gas station handles every traditional automobile. That’s why the i8 is the perfect bridge to the electric future: one that doesn’t forget the past, and uses it to its advantage.

The car is packed with new technology and manufacturing techniques. It’s composed primarily of aluminum and carbon fiber, materials which are both incredibly lightweight and strong.

The scissor doors make getting in or out an experience, and the heads-up display makes you feel more like you’re driving a car from Tron.

Needless to say, this is one present you’ll want to see in your driveway with a big red bow.