Olympian Shani Davis on Sochi, Rocking Under Armour and the Obamas 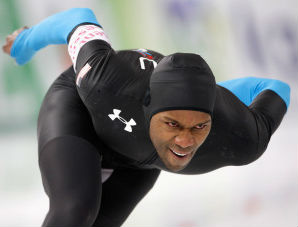 Shani Davis is gearing up for the Olympic Winter Games in Sochi, Russia.

Good luck getting a hold of Shani Davis these days. Mr. Davis coasted to victory in the 1,500 meters at the U.S. speedskating trials on New Year’s Eve, just the latest step in his preparation in his quest to dominate the field when the Winter Olympic Games convene in Sochi, Russia next month.

“That was a really great race,” Davis said, according to the Associated Press. “I’m really happy with my fitness and conditioning right now. I’m going to look to improve in certain areas, but I have plenty of time to do that before Sochi.”

We, however, caught up with Mr. Davis prior to his victory. We asked him about his preparation for the Olympics, how he balances his business obligations with performance on the ice and, among other things, about his relationship with President Obama and the First Lady. He wrote us via email.

B.E. Sports Biz: Thanks for doing this, Shani. You’re in a mode of laser focus for Sochi (you asked that this interview be conducted via email). How will you balance your business obligations with performance on the ice in Sochi? Is there a plan in place?

Shani Davis: Balancing business and performance has been a challenge like never before, but that’s a blessing. I’ve never had so many off-ice demands (and opportunities!) from media and sponsors, which comes with the territory in an Olympic year. Before 2010, I really put business interests on the back burner so nothing would distract me on the ice, but as I’ve gotten older I’ve learned to take the opportunities as the blessings they are and just prioritize. Obviously, the closer to the Games, the fewer corporate or media engagements I’ll do, but so far this season my World Cup results (Overall leader in 1000m and 1500m) prove to me that I can balance both effectively. I have a bigger team than I had heading into Vancouver, too, which allows me to better take advantage of the opportunities. I’m really thankful for everything that comes my way, and I’m receiving a tremendous real-world business education, too.

Tell us about the Under Armour suit you’re wearing these Games. Under Armour obviously put a lot of time and money into it. What are your thoughts on its performance so far?

Well, I can’t reveal too much about the suit, since it’s still a secret weapon for the U.S. skaters! I’ve been working with the company all season, including testing in Salt Lake City and even at HQ in Baltimore. So far the UA suits have performed great, and I really like the sleek, simple look. Let’s just say that FroZone will have nothing on me in the super suit department!

You’re one of the fastest in the world. Do you ever think about all that Usain Bolt’s been able to do with endorsements and wonder if you can reach that type of success?

Ha, I wish! Usain Bolt amazes me, on the track and off. I enjoy following him as much as everyone else, and obviously I can relate to the athlete given the similarities in our Olympic careers. But I’m in speedskating, not track & field – or golf, or tennis or any of the mainstream team sports.

Our fan-base is minute, microscopic, compared to track and field, a global sport with millions of participants (I heard there are only, like, 2,000 speedskaters in the U.S). Our only consistent media exposure happens in The Netherlands, which is where most of my sponsors have come from. The Olympic year is different, though, since our fan-base grows to include all Olympic fans, but even then there’s a larger pool of athletes and limited dollars once every four years. Even Apolo Ohno probably made his fortune more from his DWTS celebrity than from his Olympic skating record. All I can do is be as successful as possible with the hand I’ve been dealt, and I like to think I’m doing that.

Do you get bonuses from your endorsements for breaking the record? Is that something you’re thinking about going into your training?

Oh yes, most of my sponsor contracts are tied to performance on the ice, especially my European sponsors, who are very knowledgeable about the sport and about how much media attention they’ll get. I’m fortunate to be one of the only truly professional speedskaters in the U.S. in that all of my income comes from my efforts in my sport, either in winnings or in sponsor money, especially bonuses. In Olympic years, the US Olympic Committee also kicks in a good size bonus for medals, especially gold ones. The prize money isn’t like it is in tennis or golf, of course, so I can’t really afford to miss major international events, or even miss podiums!

What’s your reception like when you go back to Chicago?

Ha, that depends! Did I just win an Olympic gold medal? My family and friends always give me a king’s reception whenever I return from competing, but really I’m an anonymous dude most of the time. Speedskaters don’t get enough TV time to be recognizable on the streets, in Chicago or anywhere else, except maybe following the Olympics, where the homecoming is incredible. One of my best memories following 2010 was being on the El (train) in the Loop on my way to a meeting. One of the CTA workers recognized me and got really excited and really emotional. I had my gold medal, too, and he and everyone else got to pass it around. It was such a spontaneous outpouring of appreciation, it really gave me a sense of how much my accomplishments can affect people. I’ve also gotten a lot of love from the Bulls, Sox, Blackhawks and the Chicago Fire, who all featured me at their games. Very cool experiences, and it gave me a sense of my reach in Chicago.

I know that you’re a Chicago guy — have you/will you speak with the President or First Lady?

Yes, I had the opportunity to interact with both at the White House on two occasions. The Olympic Team visited after the 2010 Games, which included an appearance with Michelle Obama at a DC elementary school as part of her Let’s Move initiative. The President (or First Lady?) also invited me to attend a state dinner later that year, which was a great honor. I heard the Obama girls are roller skaters, too, which is how I got my start in Chicago. It means a lot to me – and especially to my mom – that they’ve taken an interest and have supported my career. Hopefully I’ll get another opportunity to visit in spring 2014!

When you go onto the ice in Sochi to practice, what types of things will you look for? Do you expect it to have an “Olympic” feel? Give us an idea of what goes through your mind in terms of the actual surface.

Fortunately, I raced on the Sochi track last winter at the World Championships. It wasn’t an Olympic atmosphere, but at least I got the lay of the land enough to imagine what it will be like at the Olympics. It was a slow track, like Vancouver, so knowing that helps me prepare. Before the Olympics I’ll spend a lot of time training at my base in Milwaukee, which is more similar to the Sochi track than the national team facility in Salt Lake City. Being prepared for the battle field is half the battle!