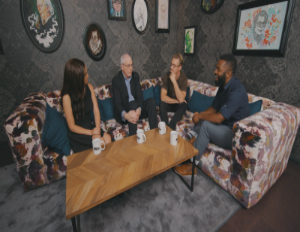 How did they determine the issues discussed?

The team behind Clarify chose issues resulting from joint research executed by the bipartisan team of Hart Research AssociatesÂ andÂ Echelon Insights. The team surveyed Spotify users on issues that matter to them and worked closely with Headcount.org–an organization centered on music and voter engagement.Â Each episode tackles a different issue that affectsÂ millennials including education, immigration, healthcare, and civil rights.

“ClarifyÂ is a breakthrough combination of dynamic conversation and news that will elevate national conversation in this campaign and encourage action come November,â€ said Cory Haik, chief strategy officer, Mic. “For so many young people the issues Spotify and Mic are addressing in this series are personal. Through Spotify’s interactive platform and influence amongst artists, paired with Mic’s strong voice on matters of social culture, we hope to strengthen points of view on equality and the power of thoughtful action.â€

According to an April Pew Research Center analysis of U.S. Census Bureau data, an estimated 69.2 million millennials (adults ages 18-35 in 2016) were voting-age citizens. That number is supremely close to the 69.7 million baby boomers (ages 52-70) in the nation’s electorate.

Despite the fact that millennials comprise a significant percentage of the voting-eligible population, they aren’t necessarily the largest bloc of actual voters. Clarify wants to help them deconstruct candidate’s messages to make an informed decision come voting day.

“With millions of young people listening to Spotify, we wanted to use the power of our platform to inspire civic engagement,â€ said Kerry Steib, Spotify’s director of Social Impact. “ThroughÂ Clarify, we hope to create a meaningful and entertaining way for music fans to explore the issues and provide information that inspires them to turn out for the polls in November.â€

Starting Tuesday, Sept. 13 and every Tuesday leading up to Election Day, Spotify will release an originalÂ audio and video episode. Famed DJ DiploÂ kicks off the series by discussing student debt and college affordability.

At the end of every episode, and throughout communications, the audience will be encouraged to visitÂ headcount.org/spotify for voter registration tools. In addition toÂ Clarify, Spotify’s Election 2016 category will host videos, podcasts, and artists’ playlists for users toÂ explore the issues from multiple viewpoints.

ClarifyÂ and Election 2016 is available for both Premium and Free Spotify users on both mobile and desktop in the U.S., only.

FacebookTwitterYoutube
← How Hip-Hop Can Engage Black Kids in STEM Education ← Has a Recent Career Decision Left You Feeling Stuck?
×