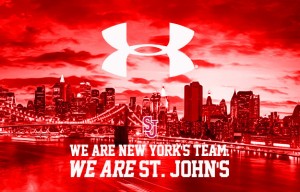 Effectively ending its relationship with Nike, St. John’s will have its athletic gear for all sports provided by Baltimore-based Under Armour, it was announced Tuesday.

The deal, the terms of which were not disclosed, will last through the 2018-19 school year.

The move will give Under Armour heightened visibility in both the basketball-crazed Big East conference, and in New York City, the nation’s premiere media market. St. John’s plays many of its basketball games in Madison Square Garden.

St. John’s is a staple of the Big East, but the revamped conference lost Syracuse, Connecticut, Pittsburgh, Rutgers and the defending national champion Louisville Cardinals. In addition to its conference schedule, the Red Storm will take on perennial national power Wisconsin on Nov. 8. St. John’s will also play its first game at the Barclays Center in Brooklyn.

“We are very excited to be entering into this agreement with Under Armour at this time,â€ said St. John’s athletic director Chris Monasch. “In recent years, Under Armour has become a dynamic force in college athletics. The alignment of our brands will be mutually beneficial to St. John’s University, our student-athletes and Under Armour.â€

“St. John’s is located in one of the great cities and entertainment centers of the world,â€ Lavin said in a statement. “Combine that with a winning basketball tradition, and one can quickly see why the Johnnies are positioned to succeed at the highest levels. Under Armour is young, innovative and bold, is making strong moves in its industry and relates well to student-athletes.â€