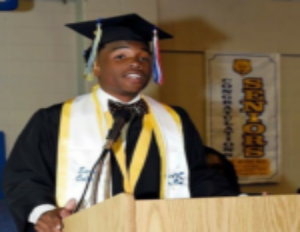 Have you ever met a young man who graduated with a college degree before receiving his high school diploma?

Meet Brian Crum. Crum is no ordinary academic achiever. A 2016 graduate of Keith High School in Orrville, Alabama, Crum is also a recipient of an Associate of Science degree from Wallace Community College Selma. He’s an athlete who is academically focused at the same time.

Crum is an example of adding extra to ordinary. It’s ordinary to see students striving for academic excellence. It’s also ordinary to find student athletes performing at high standards both athletically and academically, but it’s extraordinary to find an athlete who is at the top of his class as Salutatorian and asÂ Most Valuable Player in more than one sport, who also balances college classes in the mix.

Crum succeeded by managing his time. “I balanced my schoolwork and athletics by dedicating certain times of the day to certain activities. Sometimes I’ve had to stay up until midnight studying because my schedule was so full,â€ said Crum.

You’re probably wondering how he obtained an associate degree while in high school. Spending three years doubling up on high school and college work made it possible. His parents sat in awe as they watched their son walk across the stage to receive theÂ degree.

“The feeling was overwhelming, because he was getting his associate’s degree even before getting his high school diploma. I was very proud,â€ said Crum’s father, Harry Crum, who is also the head coach of his son’s football team.

“I was absolutely elated,â€ said Crum’s mother, Samantha Crum. “I was very proud that he had finished the task he started.â€

The student-athlete made a huge difference on the field as well. He played quarterback for the football team, and was one of the players in the return of the baseball program. The school received its first baseball win since the early 1990’s this year, with the help of Crum.

That losing streak came to an end when Crum, along with teammate John Pettway, caught the final two outs to gain a 12-9 win over Ellwood Christian this past April. This past season was the first time the school had a baseball team since 1991. CrumÂ was proud that before graduating he could play the first sport he’d ever attempted.

Crum has a remarkable ability to maintain focus despite many distractions in his environment. Now, he is gearing up for his freshman year at Alabama A&M University, where he will major in mechanical engineering on a full ride.

Why did he choose a historically black university? Crum said he likes how the teachers are genuinely interested in his learning and the enjoyment of his college experience. He feels at home at A&M, and has already formed relationships with a few instructors. Having experienced community college, Crum advises other freshmen to not lose sight of the reason for going to college: You are there to receive an education, so don’t get caught up in the “hypeâ€ of being a college student.

Crum is sure to leave no crumbs on the table, taking in every opportunity he possibly can.