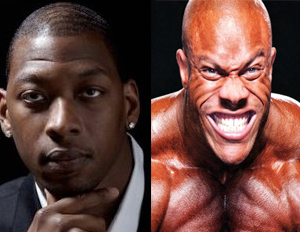 On Feb 12, The Shadow League presented the “Lunch and Learn Sports Business Series” to give entrepreneur hopefuls a look inside two unique paths taken after pursuit of an NBA career didn’t work out. The panel features Phil Heath, star body builder and owner of Gifted Nutrition, a Florida-based nutritional products business, and Bobby Simmons, former NBA player and owner of a boutique and lounge in Chicago. Alfred Edmond, Jr., SVP and chief content officer at Black Enterprise moderated the panel.

Yussuf Khan, general manager at TSL said he hopes that “people who are interested in starting their own business understand that no matter who you are, the basic principles, lessons and practices are still the same and you have to run your business as a business person, not as an athlete.â€

Heath realized while at college on a basketball scholarship that he would not likely make it to the NBA, so he began diversifying his skills and building on his assets while still in college. The results have led to a successful bodybuilding career—Heath won the Mr. Olympia international title four times—and a successful fitness business.

“He’s not afraid to do more than his job. That’s the mark of every successful entrepreneur,” says Khan of what makes Heath a success story. “They do more than what’s expected. He travels non-stop, he meets with fans and consumers, he works on the product and packaging, and he still trains to compete.â€

Having played in the NBA for six professional teams, Simmons knew he needed a long-term business strategy. In 2008 he opened Succezz,Â  a sneaker boutique in Chicago and in 2012 he opened Society2201, a luxury lounge near the Chicago Bulls’ United Center.

“Bobby, like Phil, does more than his job and constantly looks to evolve what he does. He now has three businesses and continues to look for ways to expand,â€ says Khan referring to Simmon’s latest venture, Bryson Milan, a boutique in Chicago that caters to tall men.

At the panel, which was held on the kickoff day of NBA All-Star Weekend, Heath and Simmons shared their successes and pitfalls to help others in the sports arena to diversify their talents or build new businesses. Check out a few insights on the panel from social media: