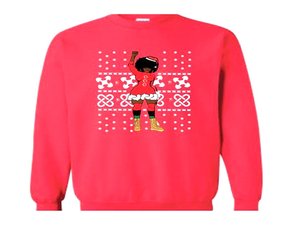 In the crowded ugly sweater market, a young black woman is blazing her own trail. Her business recently launched a black power ugly sweater line to fund the launch of a school for black entrepreneurs. But why take on Nas’ “Kneeling Santa” and 2 Chainz’s “Dabbin’ Santa” ugly sweaters?

“I grew up inspired by Nas’ socially conscious rap lyrics, and I admire 2 Chainz’s hustle. I launched this line, not to compete with these greats, but to give our community an opportunity to invest in the next generation of black entrepreneurs,â€ notes Kezia M. Williams, founding director of Black upStart. “2 Chainz earned two million in sales last year, with his Dabbin’ Santa Sweater. If Black upStart can earn 5% of that, we can turn the dream of a school into a reality,â€ she concluded.

Entrepreneurship is essential to the health of the American economy, and a powerful tool for creating new products and services. Although African Americans are more likely than Caucasians to start businesses, a report commissioned by the Panel Study of Entrepreneurial Dynamics found that they are less likely to maintain up-and-running businesses a few years later.

Black upStart, founded in November 2015 by Kezia M. Williams, seeks to address this issue by convening small cohorts of competitively selected, black entrepreneurs and innovators, with the goal of teaching them how to start and grow successful businesses.

“Freedom is the ability to control your own entrepreneurial talents. My goal is to create a village that incubates innovators equipped to start, grow, and scale successful and profitable businesses,â€ Williams noted.

In that vein, the Black upStart has cultivated 100 black entrepreneurs in the Washington, D.C. area since launching. They’ve competed as finalists for investments on Shark Tank. They’ve also earned startup capital from Piranha Tank and the Greater Washington Urban League–Thursday Network.

Black upStart has gone on to shelve products at CVS and Target, and they have even opened their own brick-and-mortar locations. Additionally, the program has gained press attention via BLACK ENTERPRISE, The Washington Post, and ABC News.

Black upStart’s ugly Christmas sweater line was created to raise capital for the launch of a school for black entrepreneurs, thus maximizing the impact of the entrepreneurship training program. Proceeds from each sweater purchased will go toward this initiative.

“Buying this sweater invests in a new generation of black entrepreneurs, sows a seed in black schools, and finances a foundation where black people can grow their business, their tribe, and their ability to compete in a capitalist economy using their greatest asset: black coins, black community, and black consciousness,â€ Williams said.

The stories behind the Afrocentric-themed ugly sweaters are uniquely inspired by the legacies of two historical figures; Mansa Musa I of Mali–a wealthy African king who lived during the 13th century–and Angela Davis, a prominent, radical, black feminist and an American activist, academic scholar, and freedom fighter, with close associations with the Black Panther Party.

The “Santa Mansaâ€ sweater is a witty spin-off of Mansa Musa I of Mali, who is known for taking 1324 pilgrimages to Mecca. During the journey, he gave out gold to charitable organizations and those in need. According to Black upStart, Santa Mansa “founded Black Christmas–a startup that delivers conscious to black people across the nation. His goal is to deliver knowledge and equal access to all black people, and fulfill America’s promise to his ancestors: 40 acres and a mule.â€

“Angie Elf,â€ inspired by Angela Davis, is Santa Mansa’s helper. According to the website, Angie Elf “co-leads the movement, to deliver the gift of consciousness to black people. She delivers magic to black girls, and ensures every black boy has a keeper.â€

The sweater concepts are brainchildren of Williams, with graphic designs by Mikea Hughley of CRE8T1V3 Design. The t-shirts are produced by a black-owned printing company, Soul Squad, which is owned by Damon Lawson. In short, the concept, design, and printing is all done by black entrepreneurs, for the sake of benefiting other aspiring black entrepreneurs.

“Black upStart is a breath of fresh air,â€ said Jamal Bryant, the pastor of The Empowerment Temple AME Church, in Baltimore. “This initiative is needed and long overdue. I hope it becomes an incubator nationwide.â€