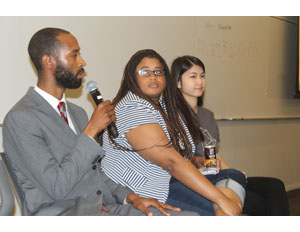 Smack dab in the middle of bustling Times Square is one of the most diversified and electric parts of Silicon Alley–New York City’s version of Silicon Valley–Startup52.

Startup52 is a diversity-focused accelerator guiding and nurturing founders and their startups. The organization embraces startups by people of color, women, people with disabilities, veterans, seniors, immigrants, and members of the LGBTQ community.

On Tuesday, at the Microsoft Tech Center in midtown, Startup52 held its “We Color Techâ€ Demo Day event. This event showcased the most recent crop of founders in Startup52’s “graduating class.â€ The founders presented their startup to an audience that included investors, advisers, and the media.

The founders hail from six different countries and seven states. They also include veterans and members of the LGBTQ community.

The startups ranged in sectors from healthcare to artificial intelligence. One company, OweYaa, a company owned by a veteran, helps other veterans find work at startups.

Another, Zed, makes a natural supplement that is supposed to help fight alcohol-induced hangovers.

However, most of the startups were companies offering platforms like OweYaa. One featured platform was Aux, an online marketplace that connects event planners with music-related talent. It provides users easier access to negotiate and book entertainment.

Another, Gaex, uses blockchain tech (bitcoin-like technology) to bring carefully curated sellers (farmers) and buyers on global exchanges together to transact securely and with greater speed and assurance. The company founders said that is would launch a pilot program in Africa’s CÃ´te d’Ivoire.