For a second year in a row, the nation’s high school graduation rate has increased, with the latest data showing that 81 percent of U.S. high school students in the class of 2013 graduated within four years.

While this number is a good sign of progression in the nation’s education system, a deeper analysis into the statistic shows that work is still needed in helping to close the achievement gap between minority students and their white peers. Recently, the Schott Foundation for Public Education released a report titled, Black Lives Matter: The Schott 50-State Report of Public Education and Black Males, that shows the national graduation rate for black males and their white counterparts has widened from 19 percentage points during the 2009-2010 school year to 21 percentage points for the 2012-2013 school year.

When asked if the achievement gap was a result of neglect or of deliberate intent, John H. Jackson, Ph.D., president and CEO of the Schott Foundation said, “It’s a level of neglect that borders on intentionality.”

Releasing a breakdown of graduation rates by state, including the nation’s capital, data from the National Center for Education Statistics shows Iowa as having the highest graduation rate at 90 percent and Washington, D.C. as having the lowest rate at 62 percent. Recently, D.C. School Chancellor Kaya Henderson proposed a plan that would help close the achievement gap in the city and raise its overall graduation rates. Under Henderson’s initiative, $20 million will be invested into programs that support the overall success of black and Hispanic male students. Currently, black and Latino male students make up 43 percent of D.C.’s public school population, yet just 48 percent of black males and 57 percent of Hispanic males graduate high school in four years.

To see a complete breakdown of graduation rates by state, check the chart below. 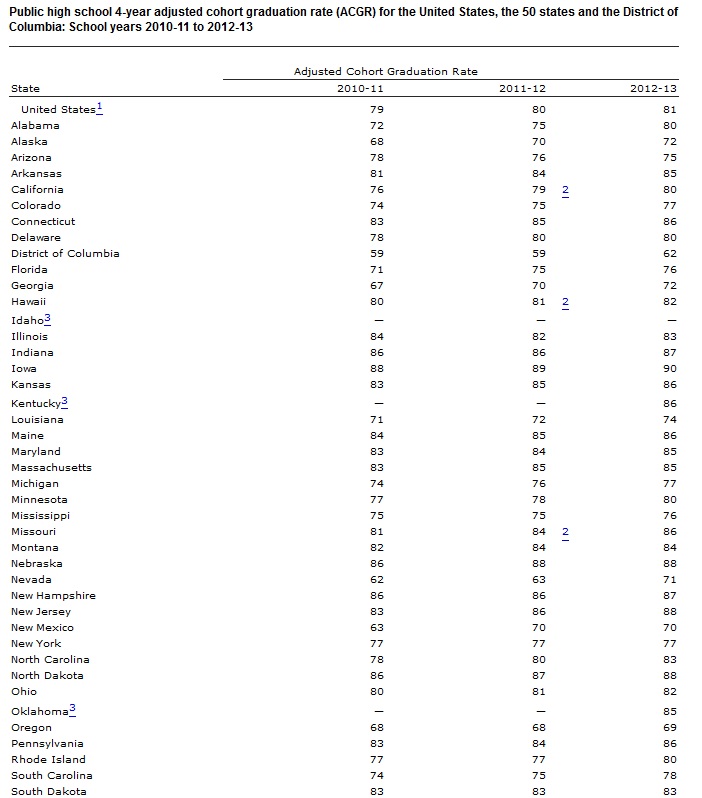