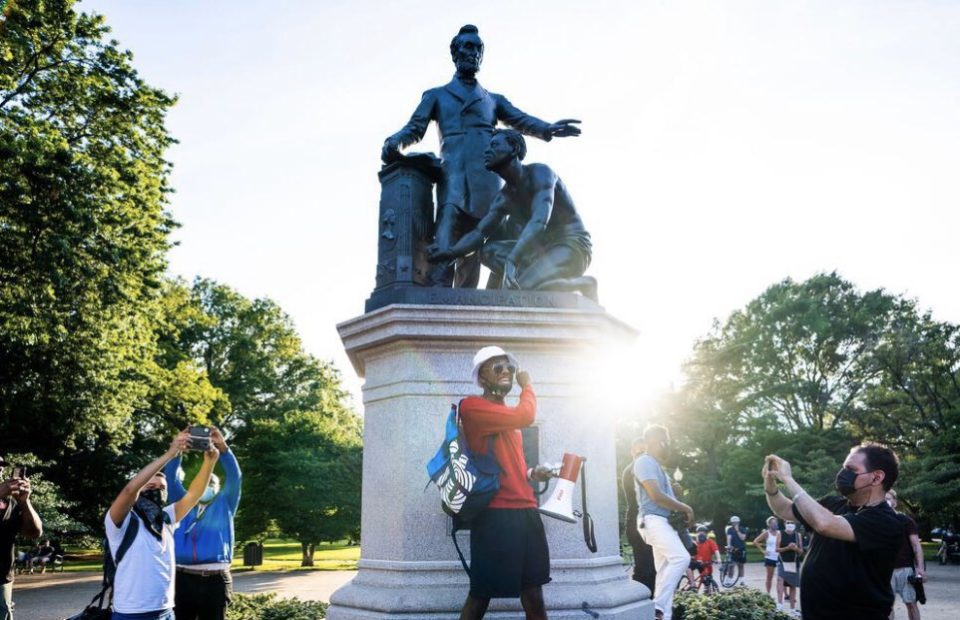 The Emancipation Memorial in Boston has been removed (Image: Twitter/@Lewsmuse)

A statue of Abraham Lincoln standing in front of a kneeling slave was removed from its perch in downtown Boston on Tuesday.

Workers in Boston removed the Emancipation Memorial early Tuesday from its perch where it had stood since 1879. City officials agreed to remove the statue in June amid nationwide Black Lives Matter protests and increasing calls to remove the statue.

The statue was a copy of a monument erected in Washington, D.C. in 1876. The copy was installed because  the original statue’s creator, Thomas Ball, was born in Boston. The statue was based on Archer Alexander, a Black man who escaped slavery, helped the Union Army, and was the last Black man recaptured under the Fugitive Slave Act of 1850.

During a summer of national and worldwide protests in support of Black Lives, many statues praising Confederate generals and racist images have come down, including Stonewall Jackson, Robert E. Lee, and Johnny Rebel. More than 12,000 Boston residents signed a petition calling for the statue’s removal. The statue will be held in storage until the city determines whether to display it in a museum.

Tory Bullock, who started the petition, told CBS Boston he couldn’t be happier to see the statue gone.

“It’s an amazing funeral, I’m here to provide a silent eulogy for this piece of artwork that’s been here for 141 years,” Bullock told CBS as the statue was hauled away on a flatbed truck. “I’m proud, I’m Black, and I’m young. This image has been doing a lot of disservice to African Americans in Boston, and now it stops.”

Boston Mayor Marty Walsh had expressed support for the statue’s removal during the summer.

“As expressed by so many during the public process this year, we fully agree that the statue should be relocated to a new publicly accessible location where its history and context can be better explained, Walsh said in a statement.

Mark Pasnik, chair of the Boston Art Commission, told CBS a new piece of artwork should replace the statue.