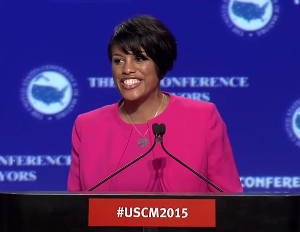 Baltimore Mayor Stephanie Rawlings-Blake is another woman making waves in the state of Maryland with her recent historic appointment to the top position in the United States Conference of Mayors.

As the first African American woman to lead the organization in its’ Â 83 years of existence, here’s what she had this to say to The Network Journal shortly after being appointed:

According to the Network Journal, prior to becoming the president of the Conference of Mayors, Rawlings-Blake served as vice president over the past year. Before being elected to serve on the organization’s Executive Committee, she was a member of the Mayors’ Water Council for two years (2010—2012), and then became its co-chair in 2012.

Under her leadership, Baltimore has received numerous awards from the USCM including an award in 2015 for $300,000 to Civic Works Inc. for its work with Growing Green Tracks Team–a collaborative effort to address blight and improve the city’s image of Baltimore and an award in 2013 for $15,000 for integrating financial education into Baltimore’s summer jobs program.