Did Stephen A. Smith Say the 'N-Word' on 'First Take?' 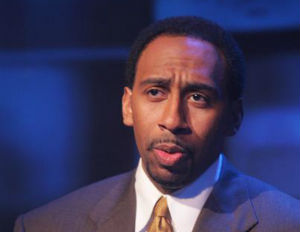 ESPN commentator and co-star of the highly popular show “First Take,” may have slipped up in the show’s latest episode.

Smith, who was discussing the upcoming NBA season and Kobe Bryant’s recent foot injury, said the words “Ni**a Please” in an exchange with Dallas Mavericks guard Dahntay Jones, who was appearing on the show as a guest.

The Lakers, who open the season against Dallas on October 30th, intimated they may be without the star guard on opening night. Smith disagreed saying there’s no way he will miss that game. He also implied Jones wouldn’t mind because it means he wouldn’t have to guard Kobe that night.

“He’ll be just fine. You think Kobe Bryant is going to miss it because his foot is sprained…Ni**a Please,” said Smith.

You can view the video of the exchange here